The Turning of Anne Merrick by Christine Blevins #TurningofAnneMerrickVirtualTour 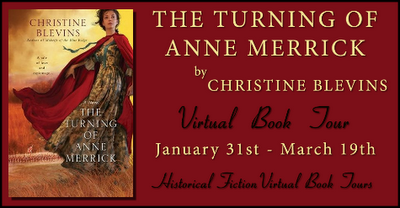 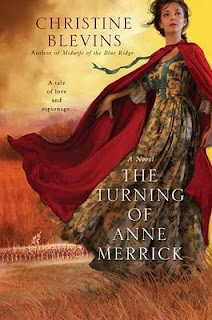 
A tale of love and espionage from the author of Midwife of the Blue Ridge...

She spies for General Washington, betrays the Redcoats and battles for America's independence...

It's 1777, and a fledgling country wages an almost hopeless struggle against the might of the British Empire. Brought together by a fateful kiss, Anne Merrick and Jack Hampton are devoted to each other and to their Patriot cause. As part of Washington's daring network of spies, they are ready and willing to pay even the ultimate price for freedom.

From battlefields raging along the Hudson, to the desperate winter encampment at Valley Forge and through the dangerous intrigue of British-occupied Philadelphia, Anne and Jack brave the trials of separation, the ravages of war and an unyielding enemy growing ever more ruthless.

For love and for country, all is put at risk-and together the pair must call upon their every ounce of courage and cunning in order to survive.

"The Turning of Anne Merrick" is the second book in Christine Blevin's trilogy about the American Revolution. This book can be read as a stand alone, but I would highly recommend that "The Tory Widow" be read first, since this is the story of Anne, how she met Jack and how she came to be the woman she is in the second book. "The Turning of Anne Merrick" picks up right where the first book left off.

Anne is an amazingly strong woman who knows exactly what has to be done, and does what is needed - even when it is difficult. She is a character I have grown very fond (as well as Jack). Anne is one tough lady when she needs to be, and her character has certainly shed much light on the important roles women played during the Revolution.

Christine has brought American history to life through the lives of her characters. She creates realistic and descriptive scenes and transports the reader back to the world of war and the great burning desire for freedom. The reader cannot help but get involved in the action and feel the heart-stopping danger that lurks between the pages.

This series is well written and appears to be very well researched. I have been captivated by Jack and Anne and cannot wait to read the last book in the trilogy. These characters have become "friends", and I really want to see where there story goes from here. 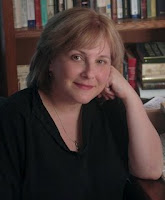 Author Christine Blevins writes what she loves to read – historical adventure stories. The Turning of Anne Merrick is Christine's third novel, and the second in a three-book series set during the American Revolution and War of Independence. A native Chicagoan, Christine lives in Elmhurst, Illinois along with her best friend and husband Brian, and The Dude, their very silly golden-doodle. She is at work finishing her next book inspired by a lifelong fascination with the foundations of American history and the revolutionary spirit.

Make sure to visit the other blogs that are part of Christine's Tour and see what they have to say about "The Turning of Anne Merrick". You can view the full schedule here.


Books were supplied by the author to read and honestly review for this tour.
Posted by tweezle at 12:30 AM