"Not in the Heart" by Chris Fabry

***Special thanks to Audra Jennings – The B&B Media Group – for sending me a review copy.*** 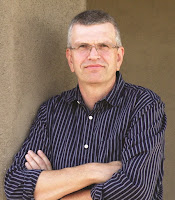 As a child, Chris Fabry wrote stories, songs and poems. The creative process invigorated him. He may not have been a fast reader, but the words on the page had a deep effect. So he vowed that if he ever had the chance to write, he would take it.

After high school, Fabry attended and graduated from the W. Page Pitt School of Journalism at Marshall University in Huntington, WV. After graduation, Fabry and his wife felt a desire for biblical education, so his pastor suggested they check out Moody Bible Institute in Chicago. At Moody, Fabry met Jerry Jenkins who learned of his desire to write and encouraged him to pursue his dream. In 1998, Jenkins and Dr. Tim LaHaye hired him to write Left Behind: The Kids series. He wrote 35 books in that series over the next six years. He later collaborated with Jenkins on the Red Rock Mysteries series and The Wormling series, and in 2008 he worked solo on the NASCAR-based RPM series.

Since then he has published four novels for adults: Dogwood, June Bug, Almost Heaven and his newest novel, Not in the Heart. Each of his first three books was nominated for a Christy Award in the Contemporary Standalone Category, winning in 2009 for Dogwood and in 2011 for Almost Heaven. In addition to his fiction work, Fabry also collaborated on two best-selling football biographies with Ohio State’s Jim Tressel and Drew Brees of the New Orleans Saints. Altogether, Fabry has published more than 70 books for children and adults.

Fabry’s other passion is broadcasting. As part of the DECCA program in high school, he worked at WNST Radio in Milton, WV. During his senior year at Marshall University, he worked for WSAZ-TV as a weekend reporter. In 1985, he began hosting Open Line, a national call-in show which he hosted until 1997. In 1993, he began a six-year stint as co-host of Mornings with Greg and Chris on WMBI in Chicago. Then in May of 2008 he began Chris Fabry Live! which received the 2008 Talk Personality of the Year Award from the National Religious Broadcasters. He can also be heard daily on Love Worth Finding, featuring the teaching of the late Dr. Adrian Rogers.

Chris and his wife of almost 30 years, Andrea, are the parents of nine children.

Truman Wiley used to report news stories from around the world, but now the most troubling headlines are his own. He’s out of work, out of touch with his family, out of his home. But nothing dogs him more than his son’s failing heart.

With mounting hospital bills and Truman’s penchant for gambling his savings, the situation seems hopeless . . . until his estranged wife throws him a lifeline—the chance to write the story of a death row inmate, a man convicted of murder who wants to donate his heart to Truman’s son.

As the execution clock ticks down, Truman uncovers disturbing evidence that points to a different killer. For his son to live, must an innocent man die? Truman’s investigation draws him down a path that will change his life, his family, and the destinies of two men forever.

You know that Chris Fabry is an exceptionally gifted writer when he can create a character like Billy in "Almost Heaven" and then create the complete opposite character in "Not in the Heart". Billy was a character that I loved, while Truman was a character I loved to dislike. He was self-centered and put everything before his family, making excuses that he couldn't do or be the person he should be so it was better to leave them alone.

Told from Truman's point of view, one gets to climb inside his head and it's not a nice place to be. I couldn't feel sorry for him, but instead felt he deserved everything he got, however, because of his family, I struggled with that thought as well. They didn't deserve that kind of man or the baggage he brought with him.

As the story progresses, one will see a exactly the effect Truman has left on the family and what has happened, but at the same time, one will also see something else - some change and love. This love will pull the family through and some of the most desperate times and actually shows how powerful love can be.

This emotional story will captivate from the beginning and will hold you in its clutches until the last sentence. It is powerful and real, and there is such strong message of faith, truth and the power of  love woven throughout.
Posted by tweezle at 12:05 AM