The Medici Boy by John L’Heureux 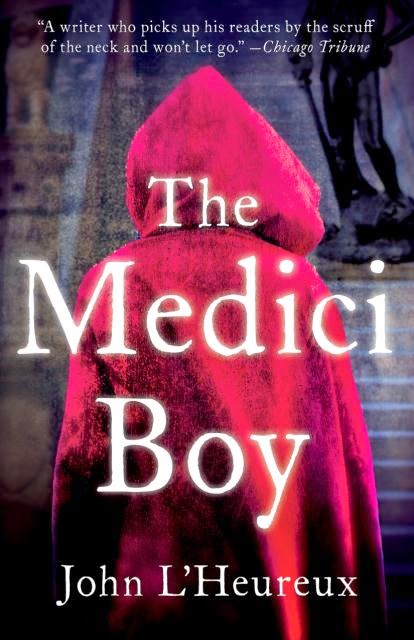 “L’Heureux’s is certainly one of America’s greatest living writers. I’d put him in the top ten...And now he’s come out with his first new novel in ten years, The Medici Boy, and it’s a masterpiece, the most ambitious, beautiful, and complex novel I’ve read this year…”
--David Vann, Financial Times of London

Astor + Blue Editions is proud to release perhaps the most passionate work of master storyteller, John L’Heureux, in The Medici Boy [ISBN:  978-1-938231-50-6 (Hard Cover); ISBN: 978-1-938231-48-3 (E-book); US $25.95; Historical / Literary Fiction; 346 Pages, April, 2014].  Described as “one of America’s greatest living writers” by the Financial Times of London, L’Heureux returns with a long-awaited new historical fiction novel; the result of years of research—backed by a Guggenheim Grant—on location in Europe.

In this well-conceived, historically accurate rendering, the Renaissance worlds of art, politics and passion collide. With his distinct style and rich, sinewy narrative, L’Heureux ingeniously transports the reader to Donatello’s Renaissance Italy—directly into his bottega, (workshop), as witnessed through the eyes of Luca Mattei, a devoted assistant.

While creating his famous bronze of David and Goliath, Donatello’s passion for his enormously beautiful model and part time rent boy, Agnolo, ignites a dangerous jealousy that ultimately leads to murder. Luca, the complex and conflicted assistant, will sacrifice all to save Donatello, even his master’s friend—the great patron of art, Cosimo de’ Medici.

John L’Heureux’s long-awaited hardcover delivers both a monumental and intimate narrative of the creative genius, Donatello, at the height of his powers. With incisive detail, L’Heureux artfully renders the master sculptor’s forbidden homosexual passions, and the artistry that enthralled the leading—and competing—powerbrokers of Renaissance Florence: the Medici and Albizzi families. The finished work is a sumptuously detailed narrative that entertains while it delves deeply into both the sacred and the profane within one of the Italian Renaissance’s most consequential cities, fifteenth century Florence.

ABOUT THE AUTHOR
Award-winning poet, novelist, and short story writer, John L’Heureux has taught at Georgetown University, Tufts, Harvard, and (for more than 35 years) in the English Department of Stanford University where he was Lane Professor of Humanities.  There he received the Dean’s Award for Excellence in Teaching and earned it again in 1998.

A prolific writer, L’Heureux has written more than twenty books of fiction, short fiction and poetry.  His works have appeared in the Atlantic Monthly, Esquire, Harper’s, The New Yorker, and have been included in dozens of anthologies including Best American Stories and Prize Stories: the O. Henry Awards.

John L’Heureux has twice received writing fellowships from the National Endowment for the Arts and in 2006 he was awarded a Guggenheim Grant to do research for The Medici Boy, his new novel.

He is retired and lives in Palo Alto with his wife Joan.

The Medici Boy may be purchased from the following:

My Thoughts:
I am having a difficult time with this review and have put if off a bit trying to decide how to write it. First let me say that The Medici Boy is very well written and comes from the first person point of view of Luca Mattei, Donatello's assistant.
The opening of the book was captivating, but soon went downhill for me with the description of Luca's life as a child/monk. I know that there needs to be a certain opening, but the discussion of his frequent masturbation was a true turn-off for me. The first few chapters made me want to stop reading, but because of my curiosity about Donatello, I persevered.
I know this has been researched by a well know and respected professor, however, I had somewhat of a hard time swallowing all that was written about Donatello's homosexuality. I had hoped this would be more in tuned with the times and not so much a passionate love affair. It may have been historically accurate, but it wasn't what I had learned in art history.
I found the book itself to be captivating after the first few chapters. It is well written and gets one caught up in the passion and the affairs of the heart and what can happen when one is too dedicated to another.

Although this book wasn't for me because of the sexual nature, it probably will appeal to art history fans, those that like a well written book or just one that wants something captivating and not the normal "run of the mill" type reading.

I received a complimentary copy of this book from the publisher. The opinions that are expressed here are my own. I was not required to write a favorable review.

Posted by tweezle at 2:10 PM No comments: