Subscription boxes... you hear all about them, but are they worth it? Some are, and some aren't -IMHO. I have tried quite a few and will discuss them in future posts, but I really need to share one that I'm currently subscribed to now. It's called the Darn Good Yarn of the Month Subscription Box from Darn Good Yarn. When I subscribed to it, there was a code that made the first month free. At the time of this post, I see the code is still active. It is at the top of the page in large white letters on a blue header. If you're interested in trying this out - now's the time! The normal price for each month is $10 plus shipping. The cost of shipping will depend on where you live, but for me here in the US, it is about $4.

What separates Darn Good Yarn from other yarns? Their yarn is made from reclaimed silk that would have been normally just thrown away! I love the idea of making something useful out of something that would just become more landfill. The yarn is interesting. I've used three different skeins of their yarns and have enjoyed each one of them. They are, of course, silk and they are a lot of fun to work with.

The subscription boxes contain a pattern, a skein of yarn and a surprise. The pattern has both a crochet version and a knit version of a project, so you don't have to worry about choosing one that is for your favorite craft. I love the versatility of the kit. Sometimes I like the knit version of the project better than the crochet version, and vise versa.  My first kit allowed me to add a surprise item for $5. Of course, I had to add it to the box! When my first kit arrived, it contained a pattern for a cowl, Darn Good Yarn Roving Silk in the Rainbow colorway, a set of knitting needles and a crochet hook, both in size 5.0mm (their surprise) and the $5 surprise was a skein of Darn Good Yarn Roving Silk in the colorway Crimson Fire. 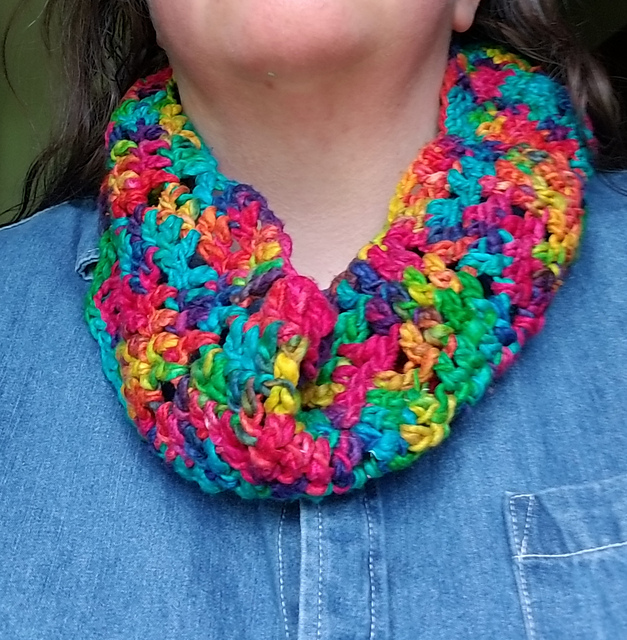 Since both skeins of yarn were the same type, I worked up both versions of the pattern. The crochet version is called Ripples Neckware by Victoria Dorn, and it was the perfect design to use the Rainbow colorway with.  This cowl worked up so quickly and in the round, so there was no seaming and just ends to weave in.  I love how bright and cheery this cowl is. Although you cannot really see it in the photo, this is done in a ripple pattern. 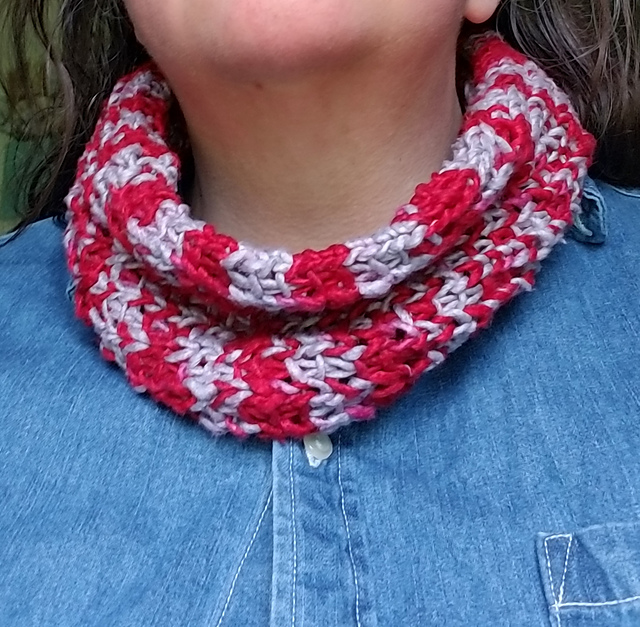 My second box contained a pattern, a skein of Darn Good Yarn Fancy Twist Silk in the colorway Pink Flamingo and a needle bag. The bag is the perfect size to hold the needle set included in the last shipment. Each month, a few items are offered at a special price to subscribers and you can add 1 or all of them to your shipment if you want. With this box, I chose a handcrafted yarn bowl. I had expected my shipping costs to go up with this added item, but it didn't! So no only did I get the bowl at a great price, but there was no extra charge to add it to my order. 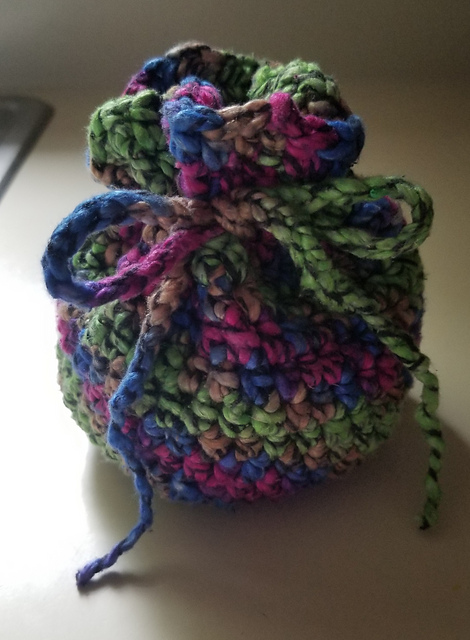 The second box contained directions for an adorable bag called "Treasure Keeper Pouch" by Darn Good Yarn. It comes in both a knit and crochet version. I did the crochet version because the dimensions were a bit larger and the bag would be more durable. I followed the directions with no modifications and found I didn't have enough yarn to make my tie the length that was specified on the directions. I was off just a bit, but still had enough to make a decent size bow when I tied it.

I am enjoying the subscription so far and will continue it. So far, each skein of yarn has been 50 grams and the patterns are designed for the yarn you receive. I like that you can pause the subscription if you need to take a break from it for a bit. I find the yarns different and fun to work with and the patterns, so far have been useful. This bag will be used as a gift bag.

I'm looking forward to next month and can't wait to see what yarn and pattern I will get - as well as the surprise. There have also been a few nice offers of exclusive add-ons that I'm mulling over. I'm sure at least one will be added to my next shipment.

Posted by tweezle at 2:34 PM No comments: