***Special thanks to Anna Patricio for sending me a review copy.*** 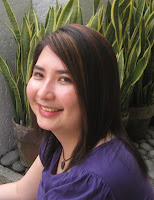 Anna Patricio is a lover of ancient history, with a particular interest in Egypt, Israel, Greece, and Rome. She is also intrigued by the Ancient Near East, though she has not delved too much into it but hopes to one day.

She undertook formal studies in Ancient History at Macquarie University. She focused mostly on Egyptology and Jewish-Christian Studies, alongside a couple of Greco-Roman units, and one on Archaeology. Though she knew there were very limited job openings for ancient history graduates, she pursued her degree anyway as it was something she had always been passionate about.

Then, about a year after her graduation, the idea to tackle historical fiction appeared in her head, and she began happily pounding away on her laptop. ASENATH is her first novel.

Recently, she traveled to Lower Egypt (specifically Cairo and the Sinai), Israel, and Jordan. She plans to return to Egypt soon, and see more of it. In the past, she has also been to Athens and Rome.

Anna is currently working on a second novel, which still takes place in Ancient Egypt, but hundreds of years after ASENATH.

In a humble fishing village on the shores of the Nile lives Asenath, a fisherman's daughter who has everything she could want. Until her perfect world is shattered.

When a warring jungle tribe ransacks the village and kidnaps her, separating her from her parents, she is forced to live as a slave. And she begins a journey that will culminate in the meeting of a handsome and kind steward named Joseph.

Like her, Joseph was taken away from his home, and it is in him that Asenath comes to find solace...and love. But just as they are beginning to form a bond, Joseph is betrayed by his master's wife and thrown into prison.

Is Asenath doomed to a lifetime of losing everything and everyone she loves?

I usually avoid reading novels about Biblical figures because they never seem to match my idea of what those figures are like, but there was something about "Asenath" that made me really want to read this one.

Told through the eyes of Asenath, one quickly develops a connection with her. She's strong, captivating, innocent and curious, and most of all, she has a beautiful heart. At a young age, she was captured and enslaved, then was adopted by an Egyptian priest and priestess. Her life runs parallel to Joseph's and it only seems natural that she would befriend him. This creates a captivating and quite well written love story that brings to life Egypt during the time of Joseph and makes the reader feel like they are there and involved instead of  "watching" from the sidelines.

There were a few times this novel didn't ring authentic for me. I couldn't help but wonder if women really were allowed to travel alone or with only one male? I got the sense that it was "normal" then, but it didn't feel "right" to me. I kept wondering why women weren't required to protect their virtue like they did later on in history. I also had trouble getting used to modern language being used in a story of a different time period. One example that sticks out in my mind was when Asenath was "hanging out" with her animals. I would find that after allowing myself to be "transported" back to that time, sometimes the 21st century phrases would break the "mood" for me and I'd remember I was reading a book.

These details shouldn't dissuade one from reading "Asenath", but it did keep me from rating this as a 5 star book. The story itself was very captivating and most definitely worth reading! Anna Patricia did a wonderful job capturing the essence of what I would imagine Joseph and Asenath to be like.