Beyond Molasses Creek by Nichole Seitz 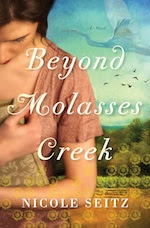 
Three lives are bound by a single book . . . and the cleansing waters of Molasses Creek.
Having traveled to the ends of the earth as a flight attendant, Ally Green has finally returned to the Lowcountry to bury her father as well as the past. But Vesey Washington is still living across the creek, and theirs is a complicated relationship—he was once her best friend . . . and also part of the reason she’s stayed away so long. When Ally discovers a message her father left behind asking her to quit running, it seems her past isn’t through with her yet.

As Ally’s wandering spirit wrestles with a deep longing to flee again, a young woman on the other side of the world escapes her life of slavery in the rock quarries of Nepal. A mysterious sketchbook leads Sunila Kunari to believe there’s more to her story than she’s ever been told, and she’s determined to follow the truth wherever it leads her.

A deep current intertwines the lives of these three souls, and a destiny of freedom, faith, and friendship awaits them all on the banks of Molasses Creek.

"Beyond Molasses Creek" is an engrossing and enjoyable read that was difficult to put down. It deals with racism and stereotypes and shows how this can interfere and have a profound impact on people's lives.

This book is written from three points of view, creating characters the reader can connect with. Ally is a 60 year old woman who has lost her father and returns to his home to finalize things. Vesey was Ally's friend growing up and he has lived all his life across the creek from Ally's home. Sunila lives in Nepal and has worked all her life in the rock quarries.

I enjoy reading Christian fiction because of the message that normally comes through the pages. In "Beyond Molasses Creek" it was muddled and focused on Ally's discontent and searching for peace. She spoke of gods and had numerous stone replicas of different gods she found in her travels. She was hung up in the past and as the book unfolds, one can understand why.

This book is about love, loss, searching, forgiveness, understanding and healing. Although categorized as Christian fiction, the faith and love of God didn't come through as much as I would have liked. One of the biggest problems I had was with the lies. A father tells a "white" lie to his daughter that she holds against him for a long time. A mother tells a huge "white" lie to her daughter, and she sees no harm in it. A set of parents tell a lie to their daughter because they need to protect everyone in the family. The lies seem OK in this story as they are just lies that won't hurt anyone and will "protect" those that are being lied to. I want to elaborate more, but I can't without giving away the story. What I will say though, is the last lie in the story came as a total surprise, because of the impact that lies have had on that person in the past.

Although a very good and well written story, this one really pushes the Christian category for me. Yes, there's discussion about faith, but it's more of a clean read with a little Christian content. 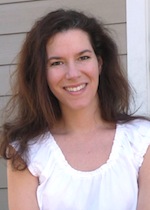 Nicole Seitz is the author of several critically acclaimed novels - The Inheritance of Beauty, Saving Cicadas, A Hundred Years of Happiness, Trouble the Water, and The Spirit of Sweetgrass. She is a graduate of the University of North Carolina at Chapel Hill's School of Journalism, and also has a degree in Illustration from Savannah College of Art & Design. Her paintings are featured on the covers of her books. Visit her at @NicoleSeitz, Facebook and www.nicoleseitz.com for more information.

Nicole is celebrating the release of Beyond Molasses Creek with a fabulous "Friendship" Facebook party! She'll be giving away a ton of great stuff (KINDLE TOUCH, some of her own beautiful artwork, a Book Club Prize Pack (10 copies of the book for your small group/book club and a Live Skype Chat with Nicole), and more!

CLICK the button (below) to RSVP for the party - then join us on February 16th for a book chat, story sharing and prizes! Hope to see you there!

Click here to see what others have to say about Beyond Molasses Creek.

I received a complimentary copy of "Beyond Molasses Creek" to read and honestly review for this tour.
Posted by tweezle at 7:02 AM