I am thrilled to be hosting Anna Maclean and her newest book, "Louisa and the Crystal Gazer"! I want to thank Anna for being so kind to share a favorite time her main character's life in her guest post below. I'm sure you will enjoy it as much as I did. Also, make sure to leave a comment below, as Anna will be giving away a prize to one lucky commenter on the tour (see details below).

A Favorite Time In the Life of Louisa May Alcott

Thanks for hosting me!

My third mystery featuring Louisa May Alcott as sleuth, Louisa and the Crystal Gazer, is set in 1855, in her early adult years, when she is still living with her mother and sisters and father, in Boston. She’s not yet famous, but is beginning to write, and publish, and develop that very important side of her life.

I think this would have been a particularly happy time for her. Illness and death have not yet struck her family, the war has not begun and her family’s dedication to abolition of the slaves encourages them to have a positive outlook, to believe that justice will become the rule of the land. Louisa is surrounded by people who love her, and by the great thinkers of the time: Emerson, Thoreau and other friends of the family who share her father’s philosophy.

How exciting it must have been! And she was young, and herself full of good health and curiosity. When her friend in this mystery, Sylvia, asks Louisa to join her in a séance Louisa says yes, thinking she may find some good material for a new story. At the time, in real life, Louisa May Alcott was living with her aunt in Boston, and working as a seamstress to earn some much needed money. I thought letting her have some adventures with a spiritualist might help pass the time for her, and so set the mystery in that milieu.

Spiritualism was very popular in the mid-nineteenth century. Mark Twain, himself not a believer, once commented that there were so many spirits coming and going that they should be required to get passports, like other tourists. I think Louisa would have agreed with Mark Twain, that much of spiritualism was bunk – and encountering P.T. Barnum at the séance would have confirmed that opinion. Louisa was looking for a good story – Barnum was looking for a new act.

What was real, though, was the need of people, then and now, to somehow communicate with a lost beloved or friend or family member – to resolve something not yet resolved but cut short by death. And so Louisa, not really fully believing but not completely disbelieving, gets involved in the murder of the spiritualist, Mrs. Agatha D. Percy.

Was there really a spiritualist of that name? I invented Agatha, but she is a reasonable creation based on the lives of many known spiritualists of the time. The young Louisa would have heard of these women, would have been intrigued by them, as were later Henry James and Elizabeth Browning. After Lincoln was assassinated, Mrs. Lincoln attended séances to speak with her husband. Louisa, alert and interested, would have been paying attention to the new pastime of séances and table tilting and rapping. Despite her own happiness at the time, her sense of her life beginning to be as she imagined it and wished it to be, she would have been intrigued…and willing to investigate to those who spoke with the dead.


For more information about Anna and her work, you can visit her website at: http://www.annamaclean.net/index.htm 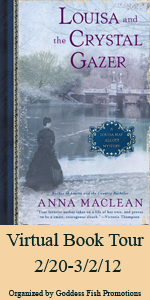 In December of 1855, I found myself once again in Boston, temporarily separated from my beloved family, living as a seamstress by day and writing my secret "blood and thunder" stories by night. I welcomed the companionship of my dear friend Sylvia Shattuck, but was quite taken aback by her strange desire to contact her long-dead father through a medium.


Nevertheless, I found myself at the home of the city's most famous crystal gazer, attending a séance with none other than the notorious showman Mr. P T Barnum. But what began as an idle curiosity became a compelling investigation--for upon our second visit to the medium, Sylvia and I found she'd been murdered! And to solve the mystery of her untimely death, I first had to uncover the surprising truth about her life...

I grew up adoring Louisa May Alcott's work, so naturally, I just had to get my hands on this book. This series focuses on Louisa May Alcott and makes her sort of a young Miss Marple type character. Louisa is an inquisitive and busybody sort that is always looking for pieces of puzzles and something to write about.

"Louisa and the Crystal Gazer" is the third book of the series, but can easily be read as a stand alone. There is enough of a back story that the reader is not lost or feeling like they missed too much to become involved with the characters.

Anna Maclean has done a brilliant job of giving her main character realism and seems to have been able to capture the essence of Louisa as I have imagined her to be. Louisa's sewing job, her curiosity, love for family and her writing paint a very interesting and fun protagonist to follow throughout the novel.

This cozy mystery is written so that both the young adult and adult audience will enjoy reading it. I found I must now go out and get the other two books of the series because of how much I enjoyed the writing style. Anna Maclean's prose it perfect, especially by adding phrases like "Gentle Reader" and "blood and thunder".

Make sure to add this to your must-read list!


**Make sure to leave a comment below because Anna will be giving away a gift basket to one randomly drawn commenter during the tour!!


A copy of this book was supplied through NetGalley to read and honestly review for this tour.