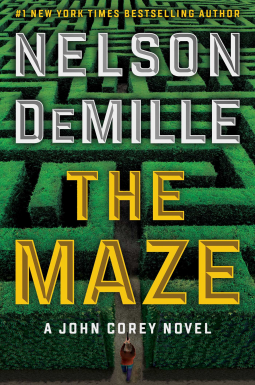 The Maze
John Corey #8
Author: Nelson DeMille
Publisher: Scribner
Release Date: October 11, 2022
ISBN: 9781501101768
Pages: 432
BLURB:
#1 New York Times bestselling author Nelson DeMille returns with a blistering thriller featuring his most popular series character, former NYPD homicide detective John Corey, called out of retirement to investigate a string of grisly murders much too close to home.In his dazzling #1 bestseller, Plum Island, Nelson DeMille introduced readers to NYPD Homicide Detective John Corey, who we first meet sitting on the back porch of his uncle’s waterfront estate on Long Island, convalescing from wounds incurred in the line of duty. A visit from the local Chief of Police results in the legendary Detective Corey becoming involved in the investigation of the murders of a married couple who were scientists at the top-secret biological research facility on Plum Island.Fast forward through six more bestselling John Corey novels and The Maze opens with Corey on the same porch, but now in forced retirement from his last job as a Federal Agent with the Diplomatic Surveillance Group. Corey is restless and looking for action, so when his former lover, Detective Beth Penrose, appears with a job offer, Corey has to once again make some decisions about his career—and about reuniting with Beth Penrose.Inspired by, and based on the actual and still unsolved Gilgo Beach murders, The Maze takes the reader on a dangerous hunt for an apparent serial killer who has murdered nine—and maybe more—prostitutes and hidden their bodies in the thick undergrowth on a lonely stretch of beach.As Corey digs deeper into this case, which has made national news, he comes to suspect that the failure of the local police to solve this sensational case may not be a result of their inexperience and incompetence—it may be something else. Something more sinister.The Maze features John Corey’s politically incorrect humor, matched by his brilliant and unorthodox investigative skills along with the surprising and shocking plot twists that are the trademark of the #1 New York Times bestselling author, Nelson DeMille.
MY THOUGHTS:
I had heard lots of good things about this series, so when it came up for review, I was excited to read it. I haven't read any of the series before, so I was jumping in with book #8 with the idea that I'd be missing some backstory, but I was not ready for what I jumped into.
The main character, John Corey, is a crass, foul-mouthed, over-the-top, sexist homicide detective. Even worse, is this book done in first person, so there's no way to even try to ignore his character since you're in his head at all times. Yes, if you haven't noticed, I don't like the character at all.
The mystery part of the book was not what I would call great either. What can I say besides this book wasn't for me in all aspects?! I'm not one for swearing, sexual content or just overall lewdness, so I cannot in any way recommend this book. After reading it, I felt like I had to wash my eyes and brain out - yes, it was that offensive to me. If it wasn't for the commitment I made to read and review, I would have dumped this book after chapter 1.
Worst part, it has no place here on my blog, except as a warning that this book is full of everything I do not stand for. It's extremely offensive and even though I've been assured by other readers of the series that the earlier books are not like this, I won't be reading any of them to find out if that's true!
I received a copy of this book through NetGalley. I was not required to post a positive review - but one of my honest opinion.
Posted by tweezle at 7:47 AM