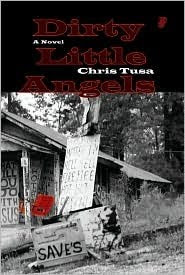 About the Book: (from publisher)

Set in the slums of New Orleans, among clusters of crack houses and abandoned buildings, Dirty Little Angels is the story of sixteen year old Hailey Trosclair. When the Trosclair family suffers a string of financial hardships and a miscarriage, Hailey finds herself looking to God to save her family. When her prayers go unanswered, Hailey puts her faith in Moses Watkins, a failed preacher and ex-con. Fascinated by Moses’s lopsided view of religion, Hailey, and her brother Cyrus, begin spending time down at an abandoned bank that Moses plans to convert into a drive-through church. Gradually, though, Moses’s twisted religious beliefs become increasingly more violent, and Hailey and Cyrus soon find themselves trapped in a world of danger and fear from which there may be no escape.

I had a hard time reading this book - not because of the quality of the writing, but because of storyline. The story centers around the poor and the broken: an alcoholic father that won't hold a job, a mother that suffers from depression, and two teens who try to survive with a broken down family that doesn't seem to care about them.

The harsh reality, broken dreams and lack of morals makes this a bleak read. It is gritty and heartbreaking, and to call it a good read doesn't really seem to fit. It is a captivating read, and no matter how much I wanted to abandon the book, I couldn't. 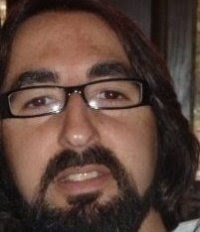 Chris Tusa was born and raised in New Orleans. His work has appeared in Connecticut Review, Texas Review, Prairie Schooner, The New Delta Review, South Dakota Review, Southeast Review, Passages North, Spoon River, New York Quarterly, Louisiana Literature, Tar River, StorySouth, and others. He has studied under a number of notable writers, including Tim Gautreaux, Sidney Wade, and Debora Gregor. With the help of a grant from the Louisiana Division of the Arts, he was able to complete his first chapbook of poetry, Inventing an End. His debut collection of poems, Haunted Bones, was published by Louisiana Literature Press in 2006. His debut novel, Dirty Little Angels, is currently agented and under consideration. He holds a B.A. in English, an M.A in English, and an M.F.A. in Creative Writing from the University of Florida. Aside from teaching in the English Department at LSU, he also acts as Managing Editor for Poetry Southeast.

To learn more about the author, you can visit his web page at: http://www.christophertusa.com


E-book was supplied by author for me to honestly review.
Posted by tweezle at 11:35 AM