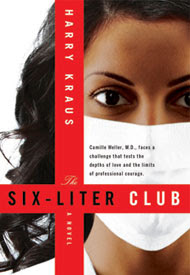 About the Book: (from Glass Road):

Dr. Camille Weller is the first African American female attending in the trauma surgical department at the Medical College of Virginia (where Kraus earned his M.D.). On her first day, she joins the Six-Liter Club - a reference to an elite group of doctors who have saved a patient after the patient loses six-liters of blood. Exhilarated, she decides to do something about the antiquated "doctors" and "nurses" signs on the locker room doors and changes clothes with the "doctors." She'll also blow their prejudices about skin color out of the water. Yet Camille has far more to overcome than preconceived notions about her skin color or sex...she's having nightmares about her childhood in the Congo, a dark closet, whispered words, and strong arms holding her back.

This was a fascinating story of an African American woman who comes to terms with her past while dealing with her present. Camille Weller's mother was African, and her father was a white American doctor that was helping in the Congo. The storyline jumps between Camille's memories in the Congo in 1964 to her present time in Richmond, VA in 1984.

As the story unfolds, so do her memories and they become a huge part of the struggles she deals with, on top of being a woman surgeon in a man's profession. This makes for an interesting read. The profession is difficult enough, and she has to make some moral/ethical choices that put her job on the line.

I really enjoyed Camille's character. She is an amazingly strong woman, who has learned to cope with what she was given. She isn't a saint, and makes many mistakes, but that gives her character believability and depth.

This is a wonderful story about struggles and achievements, pain and healing, sadness and hope and most of all, forgiveness and love. There is a Christian message that runs throughout the book, but the mainstream fiction reader should have no problem with it. I found this book to be very realistic, and an great read. I'm looking forward to reading more books by Dr. Kraus. I enjoyed his style and he seemed to nail the female character perfectly. 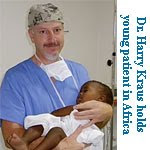 Harry Kraus has brought surgical skill to medical missions on four continents. Most recently, he returned to Somalia for a short stay. His family (wife, Kris, and three sons) is contemplating a return to Kenya for three years. He could stay in Virginia, building his surgical practice, storing wealth and acquiring house after house, car after car - but that isn't where Harry's heart lies.

Harry Kraus watched the Twin Towers fall on 9/11. He was at Ground Zero providing medical services to those who managed to escape the falling buildings. He saw firsthand the result of human relationships that lack love for fellow man. He determined to spend his life pouring love into human hearts. In Africa, he is often asked by Muslim patients why he would come halfway around the world to take care of them for no pay. Harry smiles. He tells them about the unconditional love He received from a Savior.

If you would like to learn more about Harry, make sure to visit his website at: http://www.harrykraus.com/index.html


This book was supplied by Glass Road for me to honestly review.
Posted by tweezle at 8:16 AM