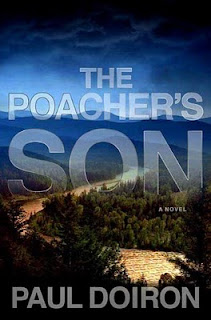 Set in the wilds of Maine, this is an explosive tale of an estranged son thrust into the hunt for a murderous fugitive—-his own father.

Game warden Mike Bowditch returns home one evening to find an alarming voice from the past on his answering machine: his father, Jack, a hard-drinking womanizer who makes his living poaching illegal game. An even more frightening call comes the next morning from the police: They are searching for the man who killed a beloved local cop the night before—-and his father is their prime suspect. Jack has escaped from police custody, and only Mike believes that his tormented father might not be guilty.

Now, alienated from the woman he loves, shunned by colleagues who have no sympathy for the suspected cop killer, Mike must come to terms with his haunted past. He knows firsthand Jack’s brutality, but is the man capable of murder? Desperate and alone, Mike strikes up an uneasy alliance with a retired warden pilot, and together the two men journey deep into the Maine wilderness in search of a runaway fugitive. There they meet a beautiful woman who claims to be Jack’s mistress but who seems to be guarding a more dangerous secret. The only way for Mike to save his father now is to find the real killer—-which could mean putting everyone he loves in the line of fire.

The Poacher’s Son is a sterling debut of literary suspense. Taut and engrossing, it represents the first in a series featuring Mike Bowditch.

When I started this book, it was late, and I snuggled down in my bed knowing I was too tired to read more than a chapter or two. That didn't happen, and I was up much, much later turning page after page, promising myself I would finish this chapter because I really had to get some sleep. Way into the wee hours of the morning, when I could no longer deny that my eyes just couldn't stay open any longer, I reluctantly put this book aside.

The Poachers Son is a remarkable story full of suspense, family drama, and twists and turns that had me guessing right up until the end. The setting and plot are perfect. My father was a game warden and Doiran is right on spot with his realistic descriptions and what a warden's life is like. The characters, too, are very realistic and believable. With the book written in first person, you really become drawn into Mike's life and his desperation and need to get answers.

This is an amazing book written by an amazing storyteller. It's gripping and full of suspense, mystery and intrigue. Once you start reading, you won't want to put it down! I'm really excited that this is book one of a series. That means there will be more to come from Mr. Doiron and his character, Mike Bowditch!

I'm giving this one an adult rating, as it has some descriptive sexual content and language.

If you 'd like to learn more about Paul Doiron, you can visit his website at: http://www.pauldoiron.com/

I received this book through Barnes and Noble's First Look program.
Posted by tweezle at 6:48 AM