Blogger Event: Pride and Prejudice and Zombies: Dawn of the Dreadfuls 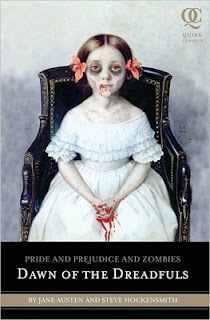 With more than one million copies in print, Pride and Prejudice and Zombies was the surprise publishing phenomenon of 2009. A best seller on three continents, PPZ has been translated into 17 languages and optioned to become a film starring Natalie Portman.

In this terrifying and hilarious prequel, we witness the genesis of the zombie plague in early-nineteenth-century England. We watch Elizabeth Bennet evolve from a naïve young teenager into a savage slayer of the undead. We laugh as she begins her first clumsy training with nunchucks and katana swords and cry when her first blush with romance goes tragically awry. Written by acclaimed novelist (and Edgar Award nominee) Steve Hockensmith, PPZII invites Austen fans to step back into Regency England, Land of the Undead!

It's finally here! The third book based on Jane Austen's classics was well worth the wait. Still in the spirit of Pride and Prejudice and Zombies, this prequel tells how Elizabeth Bennet and her sisters came to harsh realization that they would be training and learning how to slay the "dreadfuls" and how it would impact their lives.

From beginning to end, Dawn of the Dreadfuls is packed with non-stop training, zombie sightings and slayings. Full of humor and gore we've come to expect from this series, there is nothing better to read on a cold, rainy day to make you appreciate how nice and and peaceful things are. Wait... is that a floorboard squeaking? Where's my katana when I need it?!

In celebration of "Pride and Prejudice and Zombies: Dawn of the Dreadfuls", Quirk Classics is running an exciting Blogger Event! Today, you can stop over to their website and you can enter for a chance to win one of 50 Quirk Classics Prize Packs. Each Prize Pack, with a retail value of more than $100, will include:
Hurry on over to Quirk Classics today!!!
GOOD LUCK!!


I received a review copy from FSB Associates in exchange for an honest review. Thank you, Anna, for the pleasure of being able to review this fun book!
Posted by tweezle at 12:01 AM