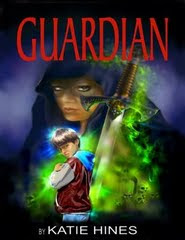 Imagine you have made a secret promise that can lead you to the discovery of an incredible treasure and an ancient power. But in order to fulfill that promise, you must defeat an age-old sect that is determined to claim the treasure and power themselves.

Drew Newman is ready to tell his friends a secret, but two strangers burst on the scene, demanding an ancient, magical book. He plummets into a world of uncertainty and fear as his home is invaded and he desperately tries to find the book.

Aided by the mysterious Jean-Paul, Drew’s search takes him and friends to Oak Island, Nova Scotia, where he continues his search. Joined with his Grandpa Ian and cousin, Zea, the tension ratchets up when Drew is kidnapped and he encounters the head of a sect that wants the book, a magical talisman and a treasure for themselves.

Sprinkled with magic, “Guardian” explores the commitment of a boy determined to fulfill his promise to his mother and claim an uncertain destiny.

Guardian came about when Hines and her husband discovered a true-to-life treasure story about Oak Island, Nova Scotia. There is a pit where, due to a lot of circumstantial evidence, people believed there was treasure. Because of all the money thrown into excavation attempts, it is called “The Money Pit.”

Although literally millions of dollars have been spent trying to excavate this pit and reach what is believed to be a fabulous treasure, fortune hunters have come up empty. The pit has flooded numerous times due to an ingenious tunnel from Smith’s Cove all the way to the treasure shaft where the excavations have taken place. People have died while trying to reach this mythical treasure.

Well-known individuals, such as John Wayne and Franklin Roosevelt, have been a part of the Oak Island treasure story excavation attempts.

Read an excerpt of Guardian at http://katiehines.com/katie-hines-new-book-guardian/guardian-excerpt.

I grew up with Nancy Drew, the Bobsey Twins, and the Hardy Boys, and love them all. This book has the same type of mystery quality with fantasy thrown in for a really nice mix. Categorized as a Middle Grade Urban Fantasy, it brings the mystery of the Templar Knights and the Holy Grail to the present time, creating a fun fantasy.

I found the characters not as believable as they could have been. The grandparents didn't seem as protective as they should have been, and some of the conversations seemed a bit awkward and a few made me think "would they have really have said that?".

The storyline was interesting and nicely thought out. The history of the Holy Grail was nicely done, and I'm sure will spur interest in many young folks. All, in all, the book was a fun read, and I'm sure it will delight male and female middle graders alike.

About the author: Although Katie Hines has been writing for as long as she can remember, she didn't get serious about it until she decided to write a memoir. Now, Hines writes urban fantasies for middle-grade children, and her first book, Guardian, is the beginning of an exciting new series. Visit http://katiehines.com/.

This book was supplied by Paula at AME for an honest review. Thank you, Paula!
Posted by tweezle at 2:52 PM