Review: Eye of the Red Tsar 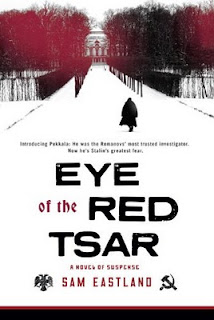 It is the time of the Great Terror. Inspector Pekkala - known as the Emerald Eye - was the most famous detective in all Russia. He was the favorite of the Tsar. Now he is the prisoner of the men he once hunted. Like millions of others, he has been sent to the gulags in Siberia and, as far as the rest of the world is concerned, he is as good as dead. But a reprieve comes when he is summoned by Stalin himself to investigate a crime. His mission - to uncover the men who really killed the Tsar and his family, and to locate the Tsar's treasure. The reward for success will be his freedom and the chance to re-unite with a woman he would have married if the Revolution had not torn them apart. The price of failure - death. Set against the backdrop of the paranoid and brutal country that Russia became under the rule of Stalin, Eye of the Red Tsar introduces a compelling new figure to readers of crime fiction.

"Eye of the Red Tsar" is a terrific fictional story of the mystery of the Romanov murders.  It involves a well developed main character, Inspector Pekkala, who once served and was friends with the Tsar and his family. The way his character is presented really makes the book work. He is revealed bit by bit, making the whole theme even more mysterious.

The book starts out at a slower pace, building the characters and plot, but it makes the story solid and as time goes on, allows you to start piecing some things together. As the story continues,  the pace picks up and then takes on an urgent air that makes you not want to put it down until it is finished.  Full of mystery, murder, suspense, and a surprise or two, this is definitely worth the read.

I am really looking forward to the next book in the series, which according to the author's website will come out in 2011!!

I won this book from Good Reads First Reads program. This has not influenced my review.
Posted by tweezle at 6:24 AM