I'm am so very honored to introduce a wonderful and gifted writer, Bernice McFadden. Bernice is the author of the well known "Sugar" which just celebrated its 10th anniversary "Glorious", which will be available in stores May 1st. (Note: "Glorious" is already available and in stock can be ordered through Amazon and Barnes and Noble right now!) Thank you, Bernice, for allowing me this great pleasure.

Without further adieu... Let's give a huge welcome to Bernice L. McFadden... 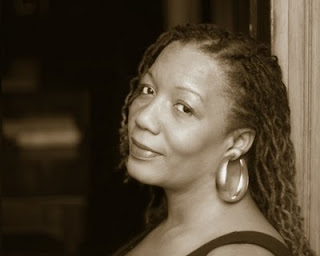 This mystical, magical life of mine began on September 26th, 1965 in Brooklyn, New York and then it began again exactly two years later to the day on a stretch of highway between Michigan and Ohio. It was there in that I was involved in a near fatal car accident. I always cite the day as a turning point in my life. I was on the brink of death, teetering on that invisible line that separates the here and the hereafter, floating in that white light our ancestors inhabit. I believe that during that ethereal moment I was given an assignment, a purpose -- a gift -- and then sent back.
For me the process of writing is similar to channeling – I am not only of the story, but often find myself in the story experiencing it - even if only from the sidelines.
I won't deny that some part of what I write comes from my own imagination, but I do feel that at least 80 percent of what I pen is being shared with me by people who have been dead and buried for years.
Many of my previous novels have historical references, but Glorious is the first, purely authentic historical novel I’ve written. I so enjoyed the feeling of fulfillment that I experienced creating a story that bore witness to history, that I have started another one, entitled Gathering of Waters.
For me, a great story provokes the heart of the reader, causing them to question what they thought they knew, and/or how they thought they felt about a certain place and/or people. I believe that Glorious does just that.
While all of my books hold a special place in my heart, I have a special relationship with this, my newest novel, for on reason in particular. The road Glorious traveled was almost identical to the journey my debut novel, Sugar, took a decade earlier.
A book that naysayer’s claimed had no audience. Sugar received 73 rejections letters - Glorious received about forty and with that, publishing declared my career to be dead, but I knew different.
Back in 1999 I told myself that If I did not have a publisher for Sugar by the time my birthday rolled around, I would self-publish. But the universe stepped in and in February of that year, a literary agent took the project on and within a week I had a two-book deal.
Between 2000 to 2008 I wrote and published a number of books to critical acclaim, but because the books were marginalized, my sales numbers began to slip and I soon found myself without a publishing deal.
I had to begin from scratch.
In January 2009 I repeated the promise I made to myself in 1999 – “If I do not have a publisher by the time my birthday rolls around, I will self-publish this book.” And once again the universe stepped in. But this time the experience was mystical in a way that not even I could have conjured up.
A significant portion of Glorious takes place during the Harlem Renaissance. In the book I mention literary icon Nella Larsen, I also thank her, along with Zora Neale Hurston, in the acknowledgements section of the book. It was Nella Larsen’s grave I went to visit just days before I received the email from Akashic Books, stating that they would be more than happy to publish Glorious.
You see…everything that should be, will be.
Like I said, my life is a mystical, magical one….

If you would like to find out more about Bernice, please visit her website at: http://www.bernicemcfadden.com
Posted by tweezle at 9:46 AM