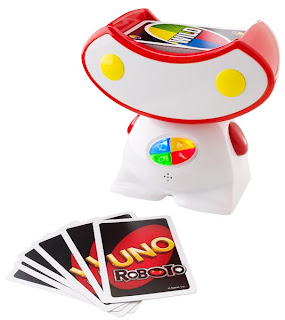 About Uno Roboto™ (description from Amazon)


Meet the interactive wild card that brings Uno to life. Customizable game play begins with recording each player's name and creating a totally unique House Rule. As you start playing cards into the head of this unpredictable little robot, he'll surprise you by calling out Random Rules and funny phrases that change the way you play. He'll call on you by name and tell you what to do next. He'll announce your House Rule then everyone must race to complete it. You never know what Uno Roboto will say next -- but no matter what he says, you still have to say Uno. The game includes 1 Uno Roboto figure, 108 cards and instructions. It's a great family game for 2 to 10 players. It's a must-have for any game night. Ages 7 and up.

I grew up with UNO™ being one of THE games we played, especially at family gatherings. Thanksgiving, Christmas and Easter hold fond memories of sitting around the table after dinner where we all gathered and played and played and played UNO™. One by one the kids would drop out and an adult would take their place until it became an adult game that went into the wee hours of the morning.

When my children were growing up, we followed the same tradition and have enjoyed UNO™. It's a game that seems to belong in our family. So when I had the opportunity to review the UNO Roboto™ Game, I jumped at the chance. My thought was how could they make the game any better? Honestly, I was skeptical and wasn't really expecting much.

When the UNO Roboto™ Game arrived,  the robot came fully loaded with batteries and a deck of 108 cards + 4 additional cards that had suggestions for the house rules, and a rule/instruction sheet. The robot was not extremely easy to get out of the box - both a plus and minus. A plus that he won't get dislodged in transport - keeping him safe and sound, but not so great if you want to keep him in the packaging to store when not in use.

We played/tested the game with all adults. My children are grown up and the youngest is 18, so it makes it a bit more challenging to find games that they consider fun. When I put this guy out, they thought he was cute, but groaned because the house rules and concept seemed "lame" to them. We quickly went over the rules, and then started playing.

When we started the robot, he asks for everyone to record their names, then he repeats them back in a robot voice. We found if you use inflections or drawn out names, they can sound very amusing as the robot repeats them. Next the robot has you record a house rule (if you want to use one) and then tells which person will start the game. When you take a turn, you discard your card on top of his head, push down on the card (which sits over the discard plate) and on to the next player. This indicated that the player's turn is over and has moved on to the next person. While playing like you would in the original game of UNO™, the robot will call out random things for certain players to do, then he chooses the next person who will play - throwing things out of sequence.

This can make a very interesting game. It can get confusing, especially when you have reversals, and no one can remember which way things were going. Then a house rule can be called out, and at first, the kids thought it was "kind of stupid" but after a couple of games, one can get confused trying to remember which house rule to use in which game. This confusion had us laughing as some of us were doing house rules from past games and then quickly going through a few to end up with the correct one. We ended up laughing so hard we had tears in our eyes.

The UNO Roboto™ Game comes HIGHLY recommend from EVERYONE in our family!!!

I received an UNO Roboto™ Game from Mattel to use and honestly review.