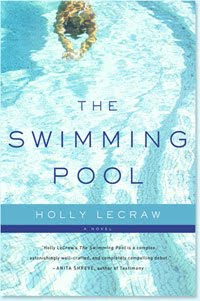 A heartbreaking affair, an unsolved murder, an explosive romance: welcome to summer on the Cape in this powerful debut.

Seven summers ago, Marcella Atkinson fell in love with Cecil McClatchey, a married father of two. But on the same night their romance abruptly ended, Cecil's wife was found murdered—and their lives changed forever. The case was never solved, and Cecil died soon after, an uncharged suspect.

Now divorced and estranged from her only daughter, Marcella lives alone, mired in grief and guilt. Meanwhile, Cecil's grown son, Jed, returns to the Cape with his sister for the first time in years. One day he finds a woman's bathing suit buried in a closet—a relic, unbeknownst to him, of his father's affair—and, on a hunch, confronts Marcella. When they fall into an affair of their own, their passion temporarily masks the pain of the past, but also leads to crises and revelations they never could have imagined.

In what is sure to be the debut of the season, The Swimming Pool delivers a sensuous narrative of such force and depth that you won't be able to put it down.

Somewhat of a summer romance and mystery, The Swimming Pool was quite well written and followed two families and a summer at the Cape. A nice summer theme with a beach and summer homes, would interest most for a quick summer read.

Personally, I didn't care for the book. I'm not big on soap operas and for me, this storyline had the same qualities as a daytime soap. With a "Cougar", a love triangle that I found pretty distasteful, and numerous descriptive sex scenes, I just got bored with the whole affair. Had there been less sex, I probably would have liked it more.

The cast of characters were interesting but I found that  I didn't like any of them. The storyline contained exciting elements:  murder, mystery, affairs, romance, and depression. One review (from the back of the book) says "as riveting and psychologically complex as Hitchcockian film noir". That's what drew me to wanting to read the book.

Holly LeCraw lives outside of Boston with her husband, who is a journalist, and three kids. Her short fiction and book reviews have appeared in a range of publications, including the Edge City Review and the Boston Book Review. Her short fiction was nominated for a Pushcart Prize. Though a newcomer as a novelist, she grew up in the book industry. To learn more about the author, you can visit her website at: http://hollylecraw.com/
Posted by tweezle at 12:56 AM