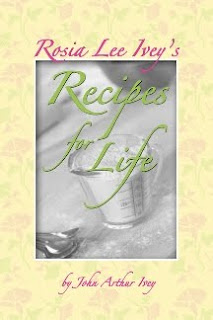 John Arthur Ivey had a few reasons for writing this book. First, he wanted to share his mother's legacy with the world. He decided the best way to do that was to share his mother's love of cooking by writing her recipes down and sharing them in a lovely cookbook. Second, he wanted to make more aware of African American cuisine which he thinks is much like jazz in art form. Third, he wanted to present the process of cooking African American cuisine, in which he gives his mother's step-by-step instructions. With these instructions the beginner, as well as the seasoned cook, will benefit.

I must say I enjoyed this cookbook and will be using it a lot. I found the recipes easy to use, and loved how the directions were written out. Most were not in the traditional ingredients first and then the direction format, but in a more conversational format like my grandmother used when she taught me how to make some of her recipes. This gave it a nice "homey" feel.

The recipes themselves are delicious! I haven't had a chance to cook everything yet, but the Macaroni 'N' Cheese, Smothered Steak, Candied Sweet Potatoes, and Raisin Bread Pudding are definitely yummy. I am planning on making the Fried Chicken tomorrow. This will be my first attempt at any fried chicken, but with these directions, I don't think I'm going to have a problem.

In the last part of the book, John shares recipes from other family members. These are written in the traditional format. Wo's "Creamy Icebox Banana Pudding" is very tasty, and Louise's "Blue Ribbon 7-Up Cake" is not only delicious, but reminds me of something my own grandmother used to make when I was young. With our weather turning warming, grilling season is upon us, and I'm going to be trying Fred Andy Ivey's "B.B.Q. Rib Thang".

This book is a true treasure. It contains so much history. Rosa Lee Ivey has cooked for more than 80 years, starting at the tender age of 13, and learned how to cook out of necessity. She didn't use recipes, but by trial and error, using siblings to test her cooking out on. John has included an interview with his mother that gives just a small look at this lively and spirited woman.

When I compare these recipes to the ones in my own heritage, there are so many similarities, but at the same time interesting differences. Most that I found are in the spicing while many of the ingredients stay the same. I really think John is correct when he states that African American Cuisine parallels jazz. Although each type of cooking is different, it still follows the same rules and "leads to the same place, and that is culinary satisfaction."

In memory of Celia Ivey Brown, Rosia Lee's second-oldest daughter, a $1 donation will be provided to the Leukemia Research Foundation for each book sold.

This book was sent to me by Dorrance Publishing to honestly review.
Posted by tweezle at 12:51 PM