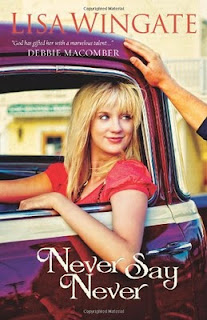 
Sometimes Life's Storms Blow in Unexpected Possibilities
Never Say Never
Kai Miller floats through life like driftwood tossed by waves. She's never put down roots--and she doesn't plan to. But when a chaotic hurricane evacuation lands her in Daily, Texas, she begins to think twice about her wayfaring existence. And when she meets hometown-boy Kemp Eldridge, she can almost picture settling down in Daily--until she discovers he may be promised to someone else.
Daily has always been a welcoming place of refuge for those the wind blows in, but for Kai, it looks like it will be just another place to leave behind. Then again, Daily always has a few surprises in store--especially when Aunt Donetta Bradford has cooked up a scheme.
My Comment:
"Never Say Never" was a really fun read. It's a cozy type of story that has suspense, drama, and some romance mixed in. The story comes from two points of view - Kai's and Donetta. Kai is a young and sensible woman who works for a cruise line and didn't have much of a family life. Donetta is an all around Southern hairdresser who uses her Southern charm to manipulate and get what she wants - but in a charming and hard to refuse kind of way. These two very different woman end up crossing paths, and that's when the fun begins.  They are both very lovable and will have you laughing - especially Donetta!
I really enjoyed this heartwarming read. I found myself terrified with the description of the hurricane. It felt very believable and made me thank heavens that I live in a hurricane-free area. The scenario felt quite realistic and I could just imagine the panic and terror that those people felt.
Although somewhat predictable, this is one of those stories that you want to curl up with and read on a yucky day. It is a great escape and makes you feel good at the end.
For those that want to know... This is Christian fiction, and it has a definite Christian theme throughout, however, I don't find it out of character. Those in the Bible Belt are strong in their faith, especially during times of disaster. This story centers around Texans in a hurricane :)
I received this book from Bethany House Publishers to honestly review.
Posted by tweezle at 12:47 PM