Review: Alice in Wonderland and Philosophy 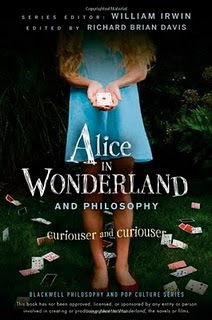 Should the Cheshire Cat's grin make us reconsider the nature of reality?
*
Can Humpty Dumpty make words mean whatever he says they mean?
*
Can drugs take us down the rabbit-hole?
*
Is Alice a feminist icon?
Alice's Adventures in Wonderland has fascinated children and adults alike for generations. Why does Lewis Carroll introduce us to such oddities as a blue caterpillar who smokes a hookah, a cat whose grin remains after its head has faded away, and a White Queen who lives backward and remembers forward? Is it all just nonsense? Was Carroll under the influence? This book probes the deeper underlying meaning in the Alice books and reveals a world rich with philosophical life lessons. Tapping into some of the greatest philosophical minds that ever lived -- Aristotle, Hume, Hobbes, and Nietzsche -- "Alice in Wonderland and Philosophy" explores life's ultimate questions through the eyes of perhaps the most endearing heroine in all of literature.

I was excited to finally hold this book in my hands. I adored "Alice's Adventures in Wonderland" as a child, so this book would be one that would explain those strange things that I didn't get way back then. I opened the book and this chill went through me. I thought: gosh, these are essays and I didn't have much for philosophy in college. Maybe this was above my head. I put the book aside, and read a nice fun fiction book and then came back to it again. I decided it was now or never, so I jumped in and started to read.

I won't lie and tell you I understood everything, however, the book as a whole was enjoyable and very enlightening! I know that I'm going to go back through this book again, after reading Alice in Wonderland over again, and then see if those things I didn't get will be clearer. "Alice... and Philosophy" definitely is a thinking book, and it has provoked lots of thought on my end!

I really enjoyed many of the essays, but I think my favorite was "Jam Yesterday, Jam Tomorrow, but Never Jam Today: On Procrastination, Hiking, and ... the Spice Girls?" by Mark D. White. I found the essay made a lot of sense, and his humor was brilliant - even in his footnotes!!" (I didn't know footnotes could be so fascinating or funny).

The essay "Is There Such a Think as a Language?" by Daniel Whiting was excellent and made me look at the language and communication both in the story as well as in our world.  Actually, when I think about it, all the essays were thought provoking - even the ones I didn't totally "get".

"Alice... and Philosophy" is really a great addition to one's library. I thoroughly enjoyed it. In fact I enjoyed it enough to add some of the others of the series to my "must purchase" list and they will be coming home with me the next time I visit my local bookstore!!

Editor Bios
Richard Brian Davis is an associate professor of philosophy at Tyndale University College and the coeditor of 24 and Philosophy.

The Blackwell Philosophy and Pop Culture Series:A spoonful of sugar helps the medicine go down, and a healthy helping of popular culture clears the cobwebs from Kant. Philosophy has had a public relations problem for a few centuries now. This series aims to change that, showing that philosophy is    relevant to your life–and not just for answering the big questions like "To be or not to be?" but for answering the little questions: "To watch or not to watch House?" Thinking deeply about TV, movies, and music doesn't make you a "complete idiot." In fact it might make you a philosopher, someone who believes the unexamined life is not worth living and the unexamined cartoon is not worth watching.

To learn more about the Blackwell Philosophy and Pop Culture series, visit www.andphilosophy.com.

This book was sent to me by Julie of FSB to honestly review.