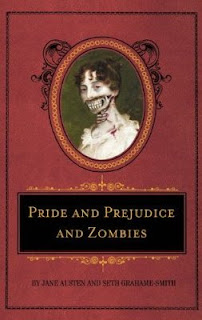 Synopsis (combined from both the back of the book and Barnes & Noble):

"It is a truth universally acknowledged that a zombie in possession of brains must be in want of more brains." So begins Pride and Prejudice and Zombies, an expanded edition of the beloved Jane Austen novel featuring all-new scenes of bone-crunching zombie mayhem. As our story opens, a mysterious plague has fallen upon the quiet English village of Meryton — and the dead are returning to life! Feisty heroine Elizabeth Bennet is determined to wipe out the zombie menace, but she’s soon distracted by the arrival of the haughty and arrogant Mr. Darcy. What ensues is a delightful comedy of manners with plenty of civilized sparring between the two young lovers — and even more violent sparring on the blood-soaked battlefield. Can Elizabeth vanquish the spawn of Satan? And overcome the social prejudices of the class-conscious landed gentry? Complete with romance, heartbreak, swordfights, cannibalism, and thousands of rotting corpses, Pride and Prejudice and Zombies transforms a masterpiece of world literature into something you’d actually want to listen to.

This Deluxe heirloom edition includes a new preface by coauthor Seth Grahame-Smith, thirteen oil-painting illustrations by Roberto Parada, and a fascinating afterword by Dr. Allen Grove of Alfred University. Best of all, this limited special edition features an incredible 30 percent more zombies - via even more all-new scenes of carnage, corpse slaying, and cannibalism. Complete with a satin ribbon marker and a leatherette binding designed to endure for generations, this hardcover volume honors a masterpiece of classic zombie literature.

When I first heard of this book, I had written it off as a fad and nothing more than a waste of time to read. It just had to be total nonsense and something that would only be appealing to kids, since it included zombies. It certainly didn't appear that way, though, as it continued to sell well at my local bookstore. When I received this book to review, I was ready to tear it apart and not like the book at all, but the opposite happened. I had such a fun time reading it, and found myself chuckling throughout many of the scenes.

Mr. Grahame-Smith combined Austen's work almost flawlessly with his own. I say almost, because there were a few places that the zombies seemed out of place and just sort of thrown in just to mention them. Overall, though, it really was brilliantly done. I have not enjoyed such humor in quite a while. Instead of destroying Austen's storyline, Mr. Grahame-Smith just added some dark humor to it making it a true treat to read.

My 16 year old daughter is now in the process of reading it, and describes the book as "awesome!". My son is on break from college now, and wants to read it before his winter break ends. He says he's heard a lot about it at the university, and really is anxious to read it to see if it is really as good as he's heard.

Yes, this is really one book that must go on everyone's "must read" list. It's just too much fun not to pass up! I also recommend if you are going to purchase this book, to buy the deluxe edition. It is a beautiful book to look at and for just a little added expense, it will last and be one that you can hand down to your children, and even their children. The cover is a beautiful brown leatherette with a color photo on the front. The color plates are well done and make such a lovely addition to the book. There is also a ribbon bookmark, that makes losing your place almost impossible. The overall look and feel of the book is one of luxury.

This book was supplied by Anna from FSB Associates for review. Thank you, Anna, for allowing me the pleasure of reviewing this book!
Posted by tweezle at 2:12 PM