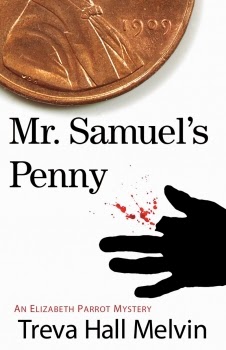 It’s 1972 and fourteen-year-old New Yorker Elizabeth Landers is sent to the sleepy town of Ahoskie, North Carolina to spend the summer with relatives. Her expectation of boredom is quickly dispelled when police sirens and flashing lights draw her to a horrible scene at the Danbury Bridge. Mr. Samuel, owner of Samuel’s Lumber Yard, has driven his car off the bridge and into the river, drowning himself and his daughter. The medical examiner thinks it’s an accident, but the Sheriff finds fresh bullet holes on the bridge right where the skid marks are. Curiously, Mr. Samuel died clutching a unique 1909 wheat penny—a penny that is then stolen from the Sheriff’s office. Lizbeth witnesses Miss Violet’s grief upon learning that her husband and child are dead, and decides she will help by finding the penny.
Her search involves Lizbeth in the lives of many Ahoskie residents. Like the owner of the grocery store, mean old Mr. Jake, who—as all the kids in Ahoskie know—hates black folks. Plenty of pennies in his till. Then there is Ms. Melanie Neely, otherwise known as “Ms. McMeanie,” who thinks the lumber yard should belong to her. And Mr. Samuel’s handsome brother Ben, who struggles to keep the business afloat after his more clever brother’s death. Lizbeth searches through the collection plates at church and in the coin jars of crazy old Aunt Ode, a strange old woman missing one eye and most of her teeth, who keeps a flask in her apron pocket and a secret in her soul.

It is peculiarly bright this evening. Will not be dark for another hour or so. The headlights of the ’68 station wagon are on, but their worth cannot be seen until the fog seeps between the slats of wood. The sweet smell of honeysuckle floats through the air on a blanket of steam rising up from the river as the car makes its way across the threshold.
The old bridge aches aloud, for its back has carried many a passenger the last hundred years to and from Ahoskie, North Carolina. Known as “The Only One,” Ahoskie has existed as a settlers’ town and with the Indian name since 1719, but without the Indian’s permission to do For a moment there is a sense of unsteadiness.
Got to get across.
Just one more time.
Sometimes easy.
Most times hard.
Then sometimes someone never crosses back.

A truly captivating young adult mystery, this book transports you back in time - a time when racism was an issue and things like integration was being forced onto students and people were very vocal about color. The main character, Elizabeth Landers, is a lovely young woman. She is so full of life and is a girl I've totally fallen in love with.

Lizbeth and her sister are staying with her aunt and uncle for the summer. When she goes to see an accident at the bridge, she gets caught up in the mystery of how it happened and why the man died clutching a penny. As the story unfolds, Lizbeth deals with some serious issues and how she not only learns but grows from them.

Part mystery, part coming of age, this book entertains the reader from the first paragraph. Although marketed as a young adult, I believe this book would be well received by all ages. I could identify with Lizbeth because of the time period. So many memories were brought back because of the wonderful descriptions and how the author captured the early 1970's.

Make sure to add "Mr. Samuel's Penny" to your must read list. I'm quite sure you'll enjoy it as much as I did! Treva Hall Melvin, has been a practicing attorney in all levels of government as a prosecutor and criminal defense attorney. A native New Yorker, she graduated from Villanova Law School in Pennsylvania and now lives in the Philadelphia area with her husband, their two children, and their dog Audrey. She loves athletics and antiquing.

Thank you to Treva Melvin, Poisoned Pen Press and Partners in Crime Virtual Book Tours for generously sharing this book with us. If you'd like to join in on an upcoming tour just stop by their sites and sign up today!
Posted by tweezle at 12:00 AM