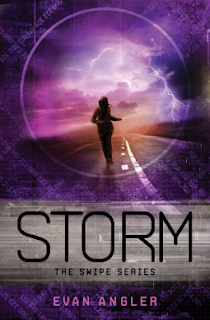 
In a future United States under the power of a charismatic leader, everyone gets the Mark at age thirteen. The Mark lets citizen shop, go to school, and even get medical care—without it, you are on your own. Few refuse to get the Mark. Those who do . . . disappear.

Logan Langly went in to get his Mark, but he backed out at the last minute. Ever since, he’s been on the run from government agents and on a quest to find his sister Lily, who disappeared when she went to get her Mark five years earlier. His journey leads him to befriend the Dust, a vast network of Markless individuals who dissent against the iron-grip rule of the government. Along the way to the capital to find Lily, the Dust receive some startling information from the Markless community, opening their eyes to the message of Christianity and warning that humanity is now entering the End of Days.

In Storm, Logan and his friends are the leaders of the Markless revolution. But while some Markless are fighting Chancellor Cylis’ army, the Dust is busy trying to find a cure for a horrible epidemic sweeping through the Marked. And it's difficult for them to know who to trust, especially when they aren't sure if Logan's sister Lily, one of the commanders in Cylis' army, is on their side or not. And all across the nation—and the world—the weather has become less stable and a storm is brewing that bigger than any of them could have ever imagined.

The last book in the series made us wonder about Erin's loyalty plus her illness really threw a wrench in things. Lily is gone and Eddie has been captured. That's about where we begin in Storm. If you haven't read the two previous books, you could probably pick this one up and not be very lost because of how the back story is woven throughout. This is really a nice addition for those like me who have been away from the series for a bit.

As the story unfolds, we discover one surprise after another - some predictable and some not. What will Logan do about Lily? Has he written her off? And then there's Eddie... Will he survive another period with the helmet? Is Erin really on board or is she still working with DOME? And will they find the doctor in time enough to save Erin? And what about the drought? Why isn't it ending?

One page turning event after another will keep the reader entertained and guessing until the end and then even beyond as the series continues with "SPARK". Full of suspense and excitement, this series will entertain both young adults and adults alike. Personally I have really enjoyed the series so far and cannot wait to get my hands on the next book. I must see what happens with Logan and... oops - can't share any spoilers. You'll just have to read this for yourself!!!


I received a copy of this book from NetGalley courtesy of Thomas Nelson. I was not required to write a positive review, but instead, one that gives my honest opinion.
Posted by tweezle at 10:04 AM