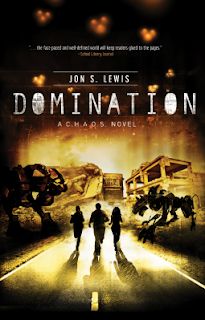 
THEIR GOAL IS SIMPLE: TOTAL DOMINATION.

With six arms and jaws that can snap a man in two, the warmongering race of aliens known as the Thule has conquered every planet they’ve attacked.

And now their invasion of Earth has begun.

Humanity’s only hope springs from a mysterious Thule legend about a Betrayer, who they believe will rise up and destroy their people. The American government tried to manufacture their own Betrayer by injecting children with Thule blood but time after time the experiment failed . . . until Colt McAlister.

A decade later, Colt is a 16-year-old cadet at the CHAOS Military Academy where he’s training to defend mankind. But he’s afraid that the alien blood may be turning him into a Thule—and he’s beginning to suspect that fulfilling his role as the Betrayer may cost him everything.

Experience a cosmic battle filled with high-tech gear, gateways to other planets, and ultimate stakes. Not everyone will survive. But heroes will rise up and step into their destiny in this earth-shaking conclusion to the C.H.A.O.S trilogy.

Please note: This is the third book in the C.H.A.O.S trilogy and really should not be read as a stand alone. Since there is not much back-story given, one will end up missing out on a lot of information that may hinder the story.

Colt and his group are back together on a mission - a dangerous mission that could cost the team members their lives. This time it's serious and the Thule are wanting world domination. Can Colt stop them? With Oz expelled, Jonas with a secret, Colt's experimental blood transfusion and Pierce a difficult member, can the team survive their own problems, let alone save mankind?

Packed with page-turning action, "Domination" finishes the trilogy nicely, yet at the same time leaves a opening for another story! This story is full of alien fighting, some stunning reveals and tragedy, making it worth the wait.

Throughout the story, the main character, Colt, talks about his faith and knows that God will never leave him. It seems a bit odd at times, especially when they are at war, but then again, what better place to be to rely on God?

This story is mostly geared towards male teens with all the war and fighting. However, with Danielle and Lily involved, this may also appeal to teen girls who enjoy science fiction or action-packed stories


I received a copy of this book from NetGalley courtesy of Thomas Nelson. I was not required to write a positive review, but instead, one that gives my honest opinion.
Posted by tweezle at 10:12 AM