Out of the Silent Planet by C. S. Lewis 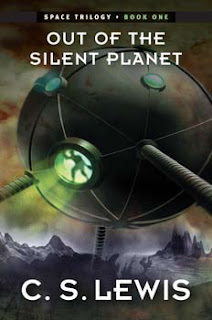 
Just as readers have been transfixed by the stories, characters, and deeper meanings of Lewis's timeless tales in The Chronicles of Narnia, most find this same allure in his classic Space Trilogy. In these fantasy stories for adults, we encounter, once again, magical creatures, a world of wonders, epic battles, and revelations of transcendent truths.

Out of the Silent Planet is the first novel in C. S. Lewis's classic science fiction trilogy. It tells the adventure of Dr. Ransom, a Cambridge academic, who is abducted and taken on a spaceship to the red planet of Malacandra, which he knows as Mars. His captors are plotting to plunder the planet's treasures and plan to offer Ransom as a sacrifice to the creatures who live there. Ransom discovers he has come from the "silent planet"—Earth—whose tragic story is known throughout the universe!

This has been a difficult review for me to write. I've been pondering over the book for the last few days and still am not going to be able to write a review that will do this book justice.

On the surface, this novel is about a man who is kidnapped and taken to the planet Malacandra. He is led to believe he is there as a sacrifice to the Sorn and ends up running away just in time to escape his doom. As he travels on his own, he finds the truth about his situation, Earth and why he is really there. A cut and dried sci-fi story.

It's the underlying message that has given me much to ponder. Mr. Lewis was a brilliant writer who who incorporated a theological message throughout the story. Its apparent, but certainly not "in your face" Christian message is well thought out and powerful.

Written during WWII (publish date 1943), I had to keep reminding myself that this story was penned before we ever touched foot on the moon. In fact, Mr. Lewis died without ever seeing that great feat accomplished - and yet, his story was still quite believably detailed. (Maybe Mr. Ransom did travel to Malacandra!)

Penned in a style that can be enjoyed by all, Out of the Silent Planet is a must read for anyone who enjoys science fiction. It is truly a classic!

Make sure to visit the tour page to see what others think about the book.

About the Author (from the publisher): 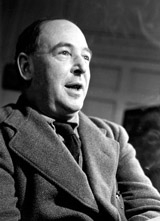 Clive Staples Lewis (1898–1963) was one of the intellectual giants of the 20th century and arguably the most influential Christian writer of his day. His major contributions in literary criticism, children's literature, fantasy literature, and popular theology brought him international renown and acclaim. He wrote more than thirty books, allowing him to reach a vast audience, and his works continue to attract thousands of new readers every year. His most distinguished and popular accomplishments include The Chronicles of Narnia, Out of the Silent Planet, The Four Loves, The Screwtape Letters, and Mere Christianity.

C. S. Lewis was born in Belfast, Ireland, on November 29, 1898, to Albert J. Lewis and Florence Augusta Hamilton Lewis. Throughout his life, Lewis was known to his family and friends as "Jack"—a nickname he coined for himself at the age of four after the beloved neighborhood dog Jacksie died. Lewis had one brother, Warren Hamilton Lewis (1895–1973). Lewis's mother died of cancer in 1908 when he was just nine years old.

In 1910, Lewis became a boarding student at Campbell College in Belfast, just one mile from his home, but withdrew one year later. In 1913, Lewis enrolled at Malvern College, where he remained for one year. It was there that, at age fifteen, he became an atheist, abandoning the Christian faith of his childhood. From Malvern, he went into private tutoring under William T. Kirkpatrick, "The Great Knock," who had also been his father's tutor.

Lewis went on to receive a scholarship to University College, Oxford, in 1916. Lewis took a hiatus from study after the outbreak of WW I, enlisting in the British Army in 1917. On April 15, 1918, Lewis was wounded in the Battle of Arras and was discharged a little more than a year later in December 1919.

While in the army, Lewis became close friends with his roommate Paddy Moore. Moore was killed in battle in 1918. After Lewis was discharged, he followed through with a promise to his friend to look after Moore's family. Lewis moved in with Paddy's mother, Jane Moore, and her daughter, Maureen, in 1920. The three of them eventually moved into "The Kilns," which they purchased jointly along with Lewis's older brother, Warren.

On May 20, 1925, Lewis was appointed Fellow and Tutor in English Literature at Oxford University, where he served for twenty-nine years until 1954.

During his time at Oxford, Lewis went from being an atheist to being one of the most influential Christian writers of the 20th century; 1931 marks the year of Lewis's conversion to Christianity. He became a member of the Church of England. Lewis cites his friendship with J. R. R. Tolkien, as well as the writings of the converted G. K. Chesterton, as influencing his conversion.

Also while at Oxford, Lewis was the core member of the now famous literary group "The Inklings." This group was an informal twice-weekly gathering of friends which included Tolkien, Hugo Dyson, Charles Williams, Dr. Robert Havard, Owen Barfield, and Nevill Coghill, among others. The meetings took place on Mondays and Thursdays. Monday meetings were held at a handful of local pubs, including The Eagle and Child, known to locals as The Bird and Baby and The Lamb and Flag. Thursday meetings were held in Lewis's rooms.

Lewis was married late in life at age fifty-eight to Joy Davidman Gresham, an American writer fifteen years his junior. They married in 1956, two years after Lewis accepted the chair of Medieval and Renaissance Literature at Cambridge, where he finished out his career.

After a four-year fight with bone cancer, Joy passed away in 1960. Lewis continued to care for her two sons, Douglas and David Gresham.

C. S. Lewis died at his home, "The Kilns," on November 22, 1963. His grave is in the yard of Holy Trinity Church in Headington Quarry, Oxford. Warren Lewis died on Monday, April 9, 1973. Their names are on a single stone bearing the inscription "Men must endure their going hence."

For those that want to explore more about C. S. Lewis and his work, here are some links to fan pages and social media that is maintained by the publisher, HarperOne:

This book was provided by the author/publisher for this tour. I was not required to write a positive review, but instead, one that gives my honest opinion.
Posted by tweezle at 8:30 AM