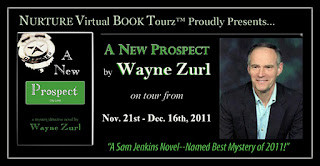 I am very pleased to be able to host today's tour. Wayne Zurl was an author I had not heard of before this tour. After reading his book, 'A New Prospect', he has found a permanent place on my bookshelf. I am anticipating the release of his next novel and anticipating collecting all his novels (yes, he's that good!)


Now you can add this novel to your own shelf. Wayne is generously offering a copy of his novel to two lucky readers! Please see details below. 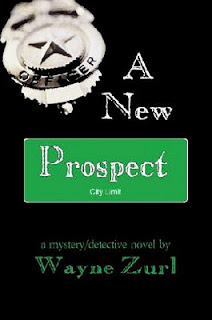 
Sam Jenkins never thought about being a fish out of water during the twenty years he spent solving crimes in New York. But things change, and after retiring to Tennessee, he gets that feeling. Jenkins becomes a cop again and is thrown headlong into a murder investigation and a steaming kettle of fish, down-home style. The victim, Cecil Lovejoy, couldn't have deserved it more. His death was the inexorable result of years misspent and appears to be no great loss, except the prime suspect is Sam's personal friend. Jenkins' abilities are attacked when Lovejoy's influential widow urges politicians to reassign the case to state investigators. Feeling like "a pork chop at a bar mitzvah" in his new workplace, Sam suspects something isn't kosher when the family tries to force him out of the picture. In true Jenkins style, Sam turns common police practice on its ear to insure an innocent man doesn't fall prey to an imperfect system and the guilty party receives appropriate justice. A NEW PROSPECT takes the reader through a New South resolutely clinging to its past and traditional way of keeping family business strictly within the family.

Have you ever started a book and had to put it aside to find out more about the author? That's what I ended up doing with "A New Prospect". When I started reading, I found myself absorbed in Chief Sam Jenkins' world because Sam seemed real - I mean really REAL. The Chief was spot on - his actions, his thoughts, his humor - it all said realism. I ended up putting the book aside to do a little checking on Mr. Zurl and what he did for a living before he was a writer. Just as I thought, he knew all about law enforcement. I found that exciting, because these are the books I adore - written from experience. There's a quality that experience  brings to the story that seems to be missing many of the police mystery type novels.

Chief Sam Jenkins is a 60 year old educated and humorous man who has captured my heart (and every other woman it seems he as contact with). He's charming, witty, and references many movies, books and music that shows his age and education - something lost on many of his co-workers and townsfolk. I cannot tell you how many times I laughed out loud and had to read things to my husband because they were so worthy of sharing. Even hubby got a chuckle out of them!

This is a clean read - no sex, although there are some mild sexual references (some are really funny!). There is adult language, but it comes from characters and situations that it would be appropriate from and was not overly done. I appreciated the way certain situations were handled - no bullying or outlandish roughness, and sometimes with care and concern. I found Sam's temperament, restraint, and humor really added depth to the story.

Mr. Zurl has created a character that has found a permanent place on my bookshelf. I look forward to the next novel in the series. Sam is a character I want to visit with again and again. He's my new hero!! 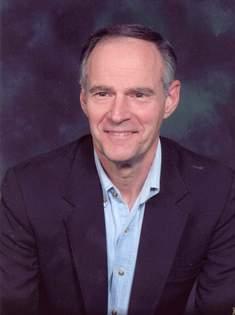 Wayne Zurl grew up on Long Island and retired after twenty years with the Suffolk County Police Department, one of the largest municipal law enforcement agencies in New York and the nation. For thirteen of those years he served as a section commander supervising investigators. He is a graduated of SUNY, Empire State College and served on active duty in the US Army during the Vietnam War and later in the reserves. Zurl left New York to live in the foothills of the Great Smoky Mountains of Tennessee with his wife, Barbara.

Eight (8) of his Sam Jenkins mysteries have been produced as audio books and simultaneously published as eBooks. His first full length novel, A New Prospect, was named Best Mystery at the 2011 Indie Book Awards by the Independent Publishing Professional's Group. It is also available on Kindle.
If you would like to learn more about Wayne or his work, please visit him at: http://www.waynezurlbooks.net

Entering is simple, just fill out the form below:

I received an e-copy of  A New Prospect  to read and honestly review for this tour.
Posted by tweezle at 12:10 AM