'LEGENDS OF THE DRAGONREALM Volume 3' by Richard A. Knaak 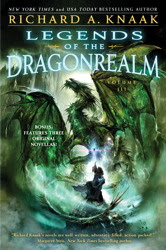 In The Crystal Dragon, sinister dreams haunt the wizard Cabe Bedlam, leading him and Darkhorse to the desolate peninsula of Legar. Here a desperate band of wolf raiders, their empire in ruins, have discovered the resting place and sorcerous artifacts of the inhuman Quel. Now Cabe, Darhorse, and the Gryphon are trapped between two hellish hordes and to defeat them, Cabe must become the willing pawn of the oldest, most enigmatic drake of all... the Crystal Dragon.

In The Dragon Crown, the young, shape-shifting drake Kyl, heir to the dragon emperor's throne, is the focus of many who seek to control the realm's destiny. Cabe most of all hopes that this new emperor will be the signal for peace among drakes and men, but knows that he might just as well prove the spark that brings the land to war. However, first Kyl must survive and in trying to assure that, Cabe will have to confront a nightmarish foe from his distant past, one who can strike at him even from within the wizard's own sanctum...

This omnibus also features three novellas, now available for the first time in print: Past Dance, Storm Lord, and The Still Lands.

One of my favorite genres is fantasy, and it's been a long time since I snuggled down with a good fantasy that featured dragons. I just love reading those terrible, scary, scaly and all powerful types of creatures!

The Legends of the Dragonrealm III certainly didn't disappoint me. The volume is packed full of of dragon tales that will keep the most die-hard dragon fan busy for quite a while! Richard Knaak is truly a master at penning a fantastic story that kept me entranced from the beginning.

Let's look at Storm Lord, one of the three novellas that wasn't covered in the synopsis, but appears to be the basis of the cover artwork...

This novella centers around the insane Dragon King that inherited the name Storm Dragon because of the constant storms he creates. His insanity makes him feared and not to be trusted, and others avoid his realm as much as possible.

Aurim is a son of a prominent line of wizards who is in love with Yssa, the half-human daughter of the Green Dragon. The green dragon is not in good standing with Aurium's family and they don't approve of Yssa, so they need to sneak off to spend time together. They meet in a forbidden territory and are discovered.

Their disobedience causes a whole series of horrible and heart pounding events to unfold that will keep the reader flipping pages to see exactly what happens next.  It is nicely paced, introduces characters and events that keep one on edge, and wraps up nicely.

I truly enjoyed this book. I had never read any of Mr. Knaak's work before, and am now looking at adding all the volumes of Legends of the Dragonrealm to my collection! 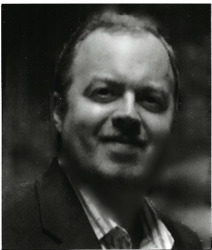 RICHARD A. KNAAK is the New York Times and USA Today bestselling fantasy author of some three dozen novels and short pieces, including The Legend of Huma and Empire of Blood for Dragonlance. He has also written numerous novels for Warcraft and Diablo. He has also written a Warcraft manga trilogy for TokyoPop.

I received a copy of this book from the publisher to read and honestly review.
Posted by tweezle at 9:55 AM