"Death After Midnight" by Dean Fetzer

I am very excited to have the privilege to host one of my favorite authors over the next few days. Dean Fetzer is the creator of Contractor Jaared Sen - the main and deliciously "hot" character and investigator extraordinaire of the Jaared Sen Quartet. Today, we will have a look at Mr. Fetzer's latest book, "Death After Midnight". Tomorrow we will be back with Mr. Fetzer with an exclusive interview, where we get a peek at the man who brought Contractor Sen to life!! 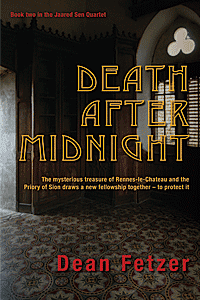 The Priory of Sion lives: January 17, 1917 – the infamous priest in the tiny village of Rennes-le-Château, Bérenger Saunière, is found collapsed in the door of his tower. Five days later, he is dead, leaving few clues as to his fabulous wealth and influence. Some say he found Visigoth hoards or Templar Treasure, Cathar artifacts or even more unbelievable, the Holy Grail. All traces died with his housekeeper and she told no one. Over a century later, Commander Jaared Sen is assigned to follow a shady character, known as ‘The Head’, pursuing the treasure of Rennes-le-Château at all costs. What is this mysterious treasure and who are the Priory of Sion? Aided by his mysterious benefactress and a beautiful art historian, Jaared follows the Head to the south of France, into the dark heart of the Languedoc, its soil and history soaked in the blood of crusaders and martyrs.

Contractor Jaared Sen is back, and this time he's involved with finding the Templar Treasure. Full of action, wit and suspense, "Death After Midnight" kept me captivated until the last page. It is no secret, I'm a die-hard Jaared Sen fan (see my review of "Death in Amber") so I may be a bit biased on one hand, but also probably harder to please on the other. I had large expectations from this novel, and Mr. Fetzer did not disappoint me.

"Death After Midnight" is the second novel in the Jarred Sen Quartet and although it can easily be read as a stand alone, I would highly recommend starting with the first book "Death in Amber" so that you can get to know who Jaared Sen is - a superb investigator with a sense of humor, who is also blind. Like most great detectives, Jaared has been know to bend the rules to get the job done.

Focusing on the myth of the Templar Treasure, "Death after Midnight" takes the reader to the southern part of France and immerses them in the richness of the area. Here the Crusades were fought and martyrs are many - and all adds a great realism to the possibility of the Templar myths. Mr. Fetzer plays on that myth with a supernatural twist - giving it an even more "spookier" feel and created an almost horror-like mystery.

The end holds a few special twists as well as answers from the first book. Being a quartet, it also sets the stage for the next book in the series, "Book of the Dead", which is due out in Autumn 2011. I can't wait for the next book - with the secrets that were revealed, I can't wait to see where things go. WOW!

A keen lighting designer, Dean visited the Edinburgh Festival with a theatre company from the University of Colorado and then stayed for a year, before moving to Washington, D.C, then London. After moving to London, he took up a career in graphic design and then web communications in the City before starting pub review website fancyapint.com with a friend. Editor of Fancyapint? in London and author of the first Jaared Sen book, Death in Amber, Dean lives in East London with his wife and two cats and dreams of that house in France.


Book was supplied by the author for me to honestly review.
Posted by tweezle at 9:04 AM