Synopsis: (from back of the book)

"In MOONLIGHT FALLS, novelist and photo journalist Vincent Zandri asks the question "If you knew your life could end at any moment, how far would you go to prove you murdered your lover? "

When any book boasts that it is written in the Hitchcock tradition, it automatically causes me to put some large demands on the story, even before I open the book. "Moonlight Falls" met those expectations and then some! What a brilliant and masterfully written novel.

I thoroughly enjoyed Detective Moonlight's quirkiness. With a bullet lodged in the brain, I was never really sure if he had a total grasp of things. He was not perfect, and that made him a character I could really like, but could also made me second guess myself in my conclusions about him.

The storyline was fantastic and had me guessing all the way through. Yes, I did figure some of it out, but not all. The twists and turns were exciting, and then ending - well I never saw it coming!

Bravo to Mr. Zandri! His novel kept me on the edge of my seat and made it almost impossible to put down. I'm really looking forward to seeing more of Detective Moonlight and hope that a series will be be on the horizon for this character. Mr. Zandri is definitely an author that I will be keeping on my watch list. He's fresh, exciting, and downright captivating! 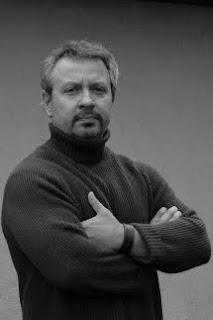 Moonlight Falls author, Vincent Zandri, is an award-winning novelist, essayist and freelance photojournalist. His novel As Catch Can (Delacorte) was touted in two pre-publication articles by Publishers Weekly and was called "Brilliant" upon its publication by The New York Post. The Boston Herald attributed it as “The most arresting first crime novel to break into print this season.” Other novels include Godchild (Bantam/Dell) and Permanence (NPI). Translated into several languages including Japanese and the Dutch, Zandri’s novels have also been sought out by numerous major movie producers, including Heyday Productions and DreamWorks. Presently he is the author of the blogs, Dangerous Dispatches and Embedded in Africa for Russia Today TV (RT). He also writes for other global publications, including Culture 11, Globalia and Globalspec. Zandri’s nonfiction has appeared in New York Newsday, Hudson Valley Magazine, Game and Fish Magazine and others, while his essays and short fiction have been featured in many journals including Fugue, Maryland Review and Orange Coast Magazine. He holds an M.F.A. in Writing from Vermont College and is a 2010 International Thriller Writer’s Awards panel judge. Zandri currently divides his time between New York and Europe. He is the drummer for the Albany-based punk band to Blisterz.
www.vincentzandri.com

Vincent is offering one lucky reader a copy of his book "Moonlight Falls". Now's your chance to add this exciting book to your library. See below how to enter. Contest ends May 25th at 11:59pm EST.

1. You must be a follower of this blog.
2. You must leave a comment WITH your email address.
3. US and Canada only.

Please note: Winners will be contacted by email have 48 hours to respond with full name and address. Book will be sent directly to winner from the author.


This book was provided by Pump Up Your Blog for me to honestly review.
Posted by tweezle at 7:47 AM