Book Tour: Coming of the Storm 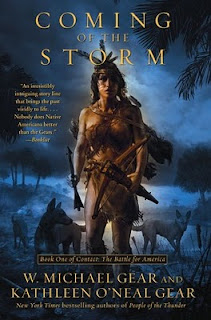 Synopsis from the publisher:

The first book in an exciting new series about Native American and European first contact by Kathleen O'Neal Gear and W. Michael Gear.

From New York Times bestselling novelists W. Michael and Kathleen O'Neal Gear comes a landmark new series portraying the devastating clash of cultures that followed the European invasion of the early America. Dramatic, authentic, and deeply moving, this first book in the Contact series tells the story of the blood-drenched years that followed Spanish explorer Hernando De Soto's landing in "La Florida" in 1539- as seen entirely through the eyes of two courageous Native American.

Black Shell, an exiled Chicksaw trader, is fascinated by the pale, bearded newcomers who call themselves "Kristianos," and not even the wise counsel of Pearl Hand, the extraordinary and beautiful women who has consented to be his mate, can dissuade him. It will unfortunately take a first-hand lesson in the Kristianos' unfathomable brutality for Black Shell to fully comprehend the dangers that these invaders pose to his people's way of life.

While his first instinct is to run away with Pearl Hand, somewhere the Kristianos cannot find them, Black Shell has been called to a greater destiny by the Spirit Being known as Horned Serpent. With Pearl Hand by his side, Black Shell must find a way to unite the disparate tribes and settlements of his native land and overcome the merciless armies of de Soto, Which will stop at nothing attain wealth and power.

For years readers have urged the Gears to bring the class of Native American and European cultures to life as only they can. Now, with Coming of the Storm, the Gears unleash their expansive breadth of knowledge and stunning writing talents to dispel the myths and falsehoods surrounding Hernando de Soto, as they paint a vivid portrait of the heroic men and women who fought a terrifying, military super power for their survival - and in so doing defined the character of a nation.

A nice video clip about "Coming of the Storm" with authors Kathleen O'Neal Gear and W. Michael Gear

If you would like to learn more about the authors, please visit their web page at: http://www.gear-gear.com/

My Comments about this book:

"Coming of the Storm" was amazing! There's really no other way to put it. When it arrived, I decided I would just read a page or two (a chapter at the most) and then catch up on some work around the house. That didn't happen. I just couldn't put the book down! Page after page, I was lost in another place and time, and had no idea that hours had passed by. It was difficult placing the bookmark between the pages, and sitting the book aside.

I confess... I love historical fiction, and have read quite a bit over the past few year. I honestly have to say, this has probably been the best piece of historical fiction that I have read so far. The Gears brought Native America to life, and made Black Shell and Pearl Hand so vivid and lifelike. I felt like I had been transported back to their time, sitting around the fire with them, feeling the heat, tasting the food, and feeling the fear and anger; all as if I was really there witnessing everything.

I recommend this book for older teens and adults, because of the graphic nature of what happened to the Native Americans during the time of de Soto's conquest. It was terrible and the horror will stay with you long after the book is finished. There is also a bit of sex involved, but most is lightly described. One particular incident is descriptive, however, it is in a dream, and can easily be skipped over since the dream is italicized, if that is a problem.

I am very excited about this series, and cannot wait until book two comes out. I'm also excited about finding a new author (actually co-authors) and will be hunting down more of their books. With more than 40 books between the Gears, I shouldn't have a problem!!

I received a review copy of "Coming of the Storm" from Pocket Books. My review is strictly my own opinion and has not been impacted by the receipt of this book.
Posted by tweezle at 3:01 AM