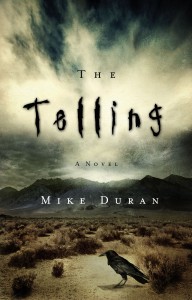 
A prophet never loses his calling, only his way.

Disfigured with a hideous scar from his stepmother, Zeph Walker lives his life in seclusion, cloistering himself in a ramshackle bookstore on the outskirts of town. But Zeph is also blessed with a gift—an uncanny ability to foresee the future,to know peoples’ deepest sins and secrets. He calls it the Telling, but he has abandoned this gift to a life of solitude, unbelief, and despair—until two detectives escort him to the county morgue where he finds his own body lying on the gurney.

On the northern fringes of Death Valley, the city of Endurance is home to llama ranches, abandoned mines, roadside attractions...and the mythical ninth gate of hell. Now, forced to investigate his own murder, Zeph discovers something even more insidious behind the urban legends and small-town eccentricities. Early miners unearthed a megalith—asacred site where spiritual and physical forces converge and where an ancient subterranean presence broods. And only Zeph can stop it.

But the scar on Zeph’s face is nothing compared to the wound on his soul. For not only has he abandoned his gift and renounced heaven, but it was his own silence that spawned the evil. Can he overcome his own despair in time to seal the ninth gate of hell?

His words unlocked something deadly,
And now the silence is killing them.

Mike Duran is a novelist, blogger, and freelance writer whose short stories, essays, and commentary have appeared in Relief Journal, Relevant Online, Breakpoint, Rue Morgue magazine, and other print and digital outlets. He is the author of the supernatural thriller THE RESURRECTION (Realms, 2011), which was a finalist in the 2011 INSPY awards, an e-book fantasy novella entitled WINTERLAND, and THE TELLING (Realms May 2012). Mike contributes monthly commentary at Novel Rocket, one of Writer's Digest 101 Most Helpful Websites for Writers. Mike is an ordained minister and lives with his wife and four grown children in Southern California. Mike's novels explore the boundaries of belief, the fragile tether between science and superstition, the depths of despair and the reaches of faith. You can learn more about Mike Duran, his writing projects, favorite music, cultural commentary, and arcane interests, at http://www.mikeduran.com/
on Facebook at: http://www.facebook.com/cerebralgrump
and on Twitter: https://twitter.com/cerebralgrump

Take a good long look at the cover of "The Telling" because that cover is perfect for what the pages between it holds. This novel is not for the faint of heart. It's dark, edgy, mysterious as well as a bit disturbing and guaranteed to make your heart pound. It's everything a good captivating page-turner should be, and then some!

Listed as Christian fiction, "The Telling" is far from an "in-your-face" Christian type of book. It is subtle and can be enjoyed by anyone who just loves a good and at times scary story. Mike Duran is a fantastic storyteller that captivates the reader from the beginning. As the story unfolds, you won't want to put this book down because you won't be able to wait find out what happens next. With short chapters, it's easy to do this, as you keep telling yourself that you'll only read one more chapter...

Anyone who enjoys such authors as Ted Dekker and Frank Peretti will certainly enjoy Mike Duran's "The Telling". Make sure to add it to your MUST read list!!


In conjunction with the CSFF Blog Tour, I received a free copy of this book from the publisher. I was not required to write a favorable review.
Posted by tweezle at 11:29 AM