Slant of Light by Steve Wiegenstein 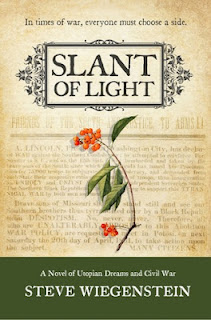 
With the nation moving toward Civil War, James Turner, a charming, impulsive writer and lecturer, Charlotte, his down-to-earth bride, and Cabot, an idealistic Harvard-educated abolitionist, are drawn together in a social experiment deep in the Missouri Ozarks.

Inspired by utopian dreams of building a new society, Turner is given a tract of land to found the community of Daybreak. But not everyone involved in the project is a willing partner and being the leader of a farming community out in the middle of nowhere isn’t exactly the life Turner envisioned. Charlotte, confronted with the hardships of rural life, must mature in a hurry to deal with the challenges of building the community while facing her husband’s betrayals and her growing attraction to Cabot. In turn, Cabot struggles to reconcile his need to leave Daybreak to join the fight against slavery and his desire to stay near the woman he loves.

As the war draws ever closer, the utopians try to remain neutral and friendly to all, but soon find neutrality is not an option. In the wake of a deadly bushwhacking, Turner discovers that he too has the capacity for ferocious violence. When war finally breaks out, Missouri descends into its uniquely savage brand of conflict in which guerrilla bands terrorize the countryside while Federal troops control the cities, and in which neither side offers or expects quarter. Ultimately, each member of Daybreak must take a stand—both in their political and personal lives.

Set just before the start of the Civil War, "Slant of Light" transports the reader back to the time when things were in an upheaval and the fight against slavery is becoming inevitable. Shining a realistic light on both the people and the Ozarks, this historical novel really brings everything alive and makes one feel like they are a part of the community.

I adored Charlotte as she was a strong character and one who wore many different aprons - those of wife and mother as well as some difficult roles in the community. She was a tough lady, yet her handling of her husband's infidelity her weaknesses made her very real.  In fact, all the characters were real - very real - and won't easily be forgotten.

"Slant of Light" was a fantastic story that will be enjoyed not only by historical fiction lovers, but by anyone who enjoys a very well written story. Make sure to add this to your must read list for this summer. You won't want to miss this one!


See what others on the tour are saying about Slant of Light. 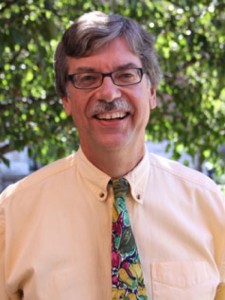 Steve Wiegenstein grew up in the eastern Missouri Ozarks and roams its back roads every chance he gets. The Black River and the Annapolis Branch Library were his two main haunts as a kid, and they remain his Mecca and Medina to this day. He is a longtime scholar of the 19th century Icarian movement in America, which provided the inspiration for Slant of Light. He particularly enjoyed weaving the real-life story of Sam Hildebrand—the notorious Confederate bushwhacker who murdered one of Steve’s ancestors–into the novel. Steve and his wife, Sharon Buzzard, both academics, live in Columbia, MO. Slant of Light, the first book in his Daybreak series, is his first novel.


I received a copy of this book from the author/publisher for this tour. I was not required to write a positive review, but instead, one that gives my honest opinion.